seezing on “the edict of February 20, 1767 — see illustration & accompanying text for such one from 1766 for Brunswick-Luneburg in Schlieker, op. cit., 3/10 —, and previous, too” and adjusting combat and prophylactic measures – “that the so-called mad-worm below the tongue shall be cut off the dogs” — see below — to latest knowledge and regulating entirely new resp.:

“ We thus resolved to cancel above-mentioned edict concerning the cutting of the mad-worm of the dogs, as is effected by this, and take other precautions by which man and live stock are protected against the bite of rabid dogs and the sad after-effects resulting from such a bite from Our subjects are averted. ”

Describing in six chapters the three grades of hydrophobia and regulating actions, punishments, and damages, also specialties for medical experiments by physicians, and the treatment of attacked persons:

“ The curing of the rabid dogs … is prohibited; except that a physician should like to experiment with this to broaden his knowledge … The moment a person is bitten by a rabid or a dog appearing even just suspicious … anyone who is first informed about this shall notify the district physician or surgeon who are already furnished with sufficient instructions in regard of the means of curing … likewise shall happen in view of the animals being the assets of man. ”

(Mandate of Frederick Augustus Duke of Saxony Against the Running About of the Dogs and the Hydrophobia in General and What is to do against it. Along with the annexes “Cause of the Hydrophobia of the Dogs and the Symptoms of such Rabies” and “Instruction How one has to behave in Case of a Bite of Rabid Dogs and How one can take Precautions against the Sad After-Effects”). Published Dresden September 7, 1782. Ibid., Electoral Saxon Court-Printing, (1782). Fol. (13¾ × 8¼ in [34.8 × 21 cm]). With two vignettes in woodcut. 12 ll. With the printed ducal signature along with the “L(oco) S(igilli)” mark and counter-signatures by George Wilhelm von Hopffgarten & the secretary Chr. Gottlieb Kretzschmar in the same way. Stitched. Uncut.

beginning with the reduction of the dogs kept in general and and “in particular order the landlords not to permit their impecunious tenants keeping dogs insofar they are not inevitably required in the practice of their profession or doings, and, in case the same refuse to abolish the dogs, shall report to the authority.” Likewise dogs running about shall be catched twice a year and – like the rabied ones – slayed unless they are not collected by their owners within 24 hours. Also shall peasants, coachmen, butchers, and others bring dogs to town “chained up under the car” at most, just as generally in town and country dogs shall not be left running about, but are to be chained up, hung with beetles or lead by ropes. However, if a rabid dog is reported, all others shall be locked up until the danger is over. Yet

“ to avoid the eruption of a rabies with the dogs as far as possible and to prevent by all means the sad after-effects the bite of rabid dogs causes, all dogs, without exception,

shall be cut the so-called mad-worm . ”

For which purpose the aldermen shall appoint persons “who are able to cut the mad-worm, are sufficiently skillful (and) receive the same for each dog … he may be big or little, two ten-pfennig pieces in the towns and the half in the country.” Yet for the confirmation “in the towns one ten-pfennig piece and in the country six pfennige.” Besides also decreeing that in pharmacies, but also elsewhere, always a sufficient stock “of medicine prepared from may-worms” shall be kept.

But of quite outstanding interest the “detailed description” of the causes of the hydrophobia on two pages and, above all,

“ The most confused ideas existed about the character of the agent causing rabies … Even the cord of connective tissue present under the tongue with carnivores, which was described as ‘mad worm’, was said to be responsible for the development of the desease with these animals. In many regions dog owners were required by decrees to have the ‘mad worm’ of their dog removed …

Already Gracius Faliscus, a contemporary of Ovid’s († 18 AD), told the tale of the worm under the tongue as cause of the madness which then was spread by Plinius (23-79 AD) in his natural histories – quoted from Froehner [in Abhandlungen aus der Geschichte der Veterinärmedizin, issue 4, Leipsic] 1925, page 78 – … ”

Realized as not etiological, present worm decree was revoked for Dresden 1796 (now relying on quarantine & hygiene) and in Prussia 1797 (ban on curing sick dogs, suggestions for the treatment of bitten men).

Of quite outstanding interest, however, the 2-page “circumstantial description” of the causes of hydrophobia, yet above all

the 8-page directions for the therapy of a bitten man

with all details in respect of cleansing the wound, hygiene, rest, diet – elder-flower-tea – and animated care.

This richness of details makes the mandate to a true source. For once in regard of the so-called mad-worm the removal of which later – so by a Prussian decree of 1797 – was diagnosed as ineffective. Quite especially, however, in comparison with the 16-page follow-up mandate of 1796 which attaches importance to the hygiene of animal & man in general, yet in particular for the “disposal” of sick dogs as also the care of bitten humans in a fundamental manner considerably beyond wound care.

with direct reference to the one above “since the intent was not achieved sufficiently … We have found Ourselves … obliged … to issue another mandate, and therein,

after the experiences made since issuance of abovementioned mandate,

to summarize all that what in future shall be observed in regard of this subject.”

Commencing again with the reduction of dogs kept in general, “since generally by the keeping of useless and unnecessary dogs the danger for the public is increased by the running about of the same, and at the same time the latter is deprived of a considerable part of the most indispensable foodstuff … In particular the notorious poor, who receive their living fully or partially from the local handout-office, and in such a way would keep their dogs at the expense of the public, to deny the keeping of the dogs, or yet, if the authority … considers it beneficial to grant a permit, not to extend this to more than one dog per family.”

Dogs running about without muzzle have to be catched at night generally, otherwise as required, but not under twice a year, and are redeemable for eight – in case of their capture by the night-watchman 16 – ten-pfennig pieces, irrespective of additional punishment. Peasants, coachmen, butchers, and others have to chain up their dogs under the car if they must take them along coming to town. And in town and country generally no dog is permitted to run round freely, but to be chained up, supplied with a so-called muzzle or lead by ropes. If a rabid dog is known all others have to be locked in till the danger is over.

Dogs running about free and without muzzle shall be captured at night strictly, otherwise as needed, yet at least twice a year, and can be redeemed for eight – if picked up by the night-watchman 16 – ten pennies, further penalties notwithstanding. Diagnosed as ineffective and therefore here not mentioned anymore the liability to cut the socalled mad-worm. However, now

— this is the introduction of the precautionary quarantine —

“ for prevention of the most sad after-effects to be afraid of of rabid dogs … every owner of a dog … has to observe the same minutely, and on perception of but the remotest symptoms – as described in annex I – of a madness befalling it lock it in at once … however, if the arisen surmise … proves true, kill the same without delay. ”

And then follows upon the quarantine complete hygiene :

“ A killed mad dog … just as all other live stock bitten and killed by a mad dog, has to be buried at least two yards underground – so already 1782 – and covered with lime; also thereupon the precaution has to be applied that the same is not touched with bare hands, but removed

with gloves , or by help of short wooden sticks ,

and the instruments or gloves used in doing so thrown into the open grave … not for instance into a river or creek flowing by. ”

Of outstanding interest furthermore the 3½-page “description drawn up by Our Board of Health” of the causes of hydrophobia, compared with the former one enriched by new aspects and almost doubled in length, yet foremost, freed not least of some absurdities, the

6½-page instruction for the treatment of a bitten person

with all details to clean the wound, hygiene, rest, temperature, food – elder bloom tea – and animating care, without intending to substitute the consultation of a physician or – at least – a qualified barber surgeon as quickly as possible. As against the decree of 1782 yet also adding

the instruction for first self-help as also the ligature

of the affected part of the body ,

“ so that the sucking in of the poison is prevented ”.

Yet in such a way a 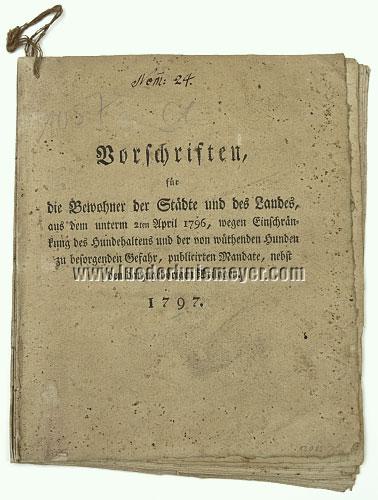 – – – – The same per regulations, for the inhabitants of the towns and the country, from the mandate published April 2, on behalf of the restriction of keeping dogs and the danger to be feared from mad dogs, along with the associated annexes “Causes of the Hydrophobia of the Dogs and the Symptoms of such Rabies” and “Instruction How to behave in case of the Bite of Mad Dogs, and guard against its Sad Consequences”. (Dresden) 1797. Sm. 4to (8⅛ × 6¾ in [20.5 × 17 cm]). 24 pp. Stitched. With yarn loop top left.

File number “Nom: 24” by old hand on title. This browned and somewhat stain-spotted and with small inconspicuous worm-gallery affecting quite minimally still the second sheet.

The billboard version with cord

of the extraordinarily substantial decree on combating & curing hydrophobia,

Unabridged almost throughout taken verbatim from the mandate besides the 5½-page description of the causes of hydrophobia, yet foremost the 10-page instruction on the treatment of a bitten person with all details on cleaning the wound, hygiene, care, temperature, food, and care.

An important evidence demonstrating exemplarily the translation of chancellery’s law into everyday life.