Already during his lifetime he is frequently copied .

A key image of his physico-theological and nature-philosophical resp. stance is the Evening from the set of the Four Times of Day of the Deer … who are sunk in the sight of the evening starlit sky, what has to be regarded as proof for R.’s conviction that nature were a revelation of the Lord’s wisdom, almightiness and graciousness. Niemeyer (2015) attests R. ‘pioneering creativity’. Spickernagel (2016) examines R.’s works in the context of the physico-theology originating from Protestantism and R.’s pictorial means for the visualization of movement …

Among the abnormalities from the animal kingdom the Fox with Two Tails (1744) and the Two Hares grown together at the Head (1765) stand out, both engravings are still relevant for the scientific history of veterinary medicine …

In 1734 this Well-Trained Pointer has been drawn from Nature during its Action inside the Pheasantry by the Imperial Pleasure Seat Nymphenburg at Munich. This above behind a high column of water. Copper printing plate in reverse to sheet 32, Thienemann 274, of the Most Wondrous Deer. Inscribed: J. E. Ridinger fec. et excud. 1744, otherwise in German as before. 14¾ × 11¼ in (37,3 × 28,7 cm). – The original numbering “32” restored only about 1859. 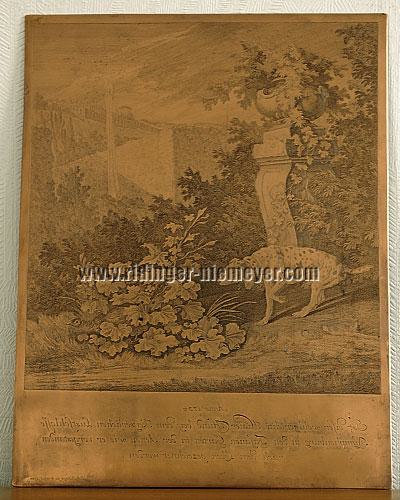 by which Ridinger by emphasize of Nymphenburg Palace

Only one year later the glory of these few years oppressive for the emperor as well as for Bavaria and Germany ended by death. Yet unchanged shining through the times the reddish golden brilliance of this optically wonderful original copper printing plate of 1744 by which Ridinger entered himself into the Book of History. – See the complete description.

from the so-called Thieme-Becker Block — “444 copper printing plates (in reverse) presently (1933) in private estate in Charlottenburg (Berlin)” — turned up again after the turnaround and here researched seamlessly back to the Ridinger estate, correcting all the losses supposed by Thienemann (1856) as, just i.a., the plates to the 101-sheet set of the

Most Wondrous Deer and other Peculiar Animals,

whose new complete edition was published in Leipsic just about 1859, at what – and only here – its original numbering, partly changed for the Engelbrecht-Herzberg editions about 1824/25, was restored.

Shielded from tarnishing by fine application of varnish,

the optically excellently preserved, worldwide unique plates are generally still printable in the course of its use through the times, however, it is offered and sold as work of art and collector’s item, thus without prejudice to its eventual printing quality. And

with the recommendation of timeless-elegant frameless hanging

so that you shall experience the respective light reflections to the fullest.

whose conservational undemandingness they share with no other one-dimensional artistic medium in all their quantitative plenty.

Classic insensitive original Ridinger copper printing plates in such a manner are synonym for pure joy sui generis. Absolutely free choice of place, of all places acceptable those of the finest light incidence so that they can play off their reflectivity to the fullest, no matter if from natural or artificial lighting.

At which the recommendation here aims indeed. 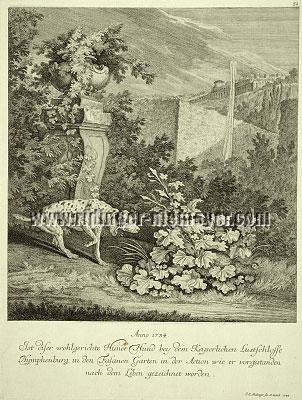 from above
copper printing plate

of Eperor Charles VII into Munich

“ were appointed in the Holy Roman Empire by the grant of the so-called comitiva. This represented a priviledge to

belonged for instance: the grant of acts of grace, so the conferment of

patents of nobility and grants of arms ”

In German. C. 13½ × 9⅝ in (343 × 244 mm). 6 unnumerated sheet, the last 3 pages of which white. Contemp. marbled brown leather with blindtooled fillet along the board edges and shiningly gilt-colored textured brocade paper pastedowns with gouached rich floral decor and transcription flap on the back pastedown. In later marbled board slip case.

For “ Ingenious Mister … and
far-famous painter,
engraver and art publisher … by which he has rendered …
immortal services
also to the noble arts and known far and wide by innumerable samples, hence before others proved himself
worthy quite a
Honorific Commendation « 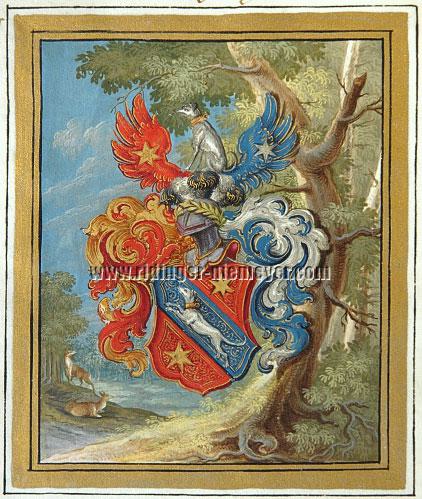 in context with painting, drawings and prints (Th. 293)

of the Deer of Lake Starnberg

as autographic works of Ridinger’s.

With the result that to the significantly updated opinion here also for above arms painting an authentic seems to be arguable. For not having to state in the final weighing — 32-page detailed illustrated documentation on request — the authenticity suggests itself. And thus

as such ridingerianum
neither Schwerdt nor Baron Gutmann (Schwarz)
and all the other grands had nowhere near been granted ever.