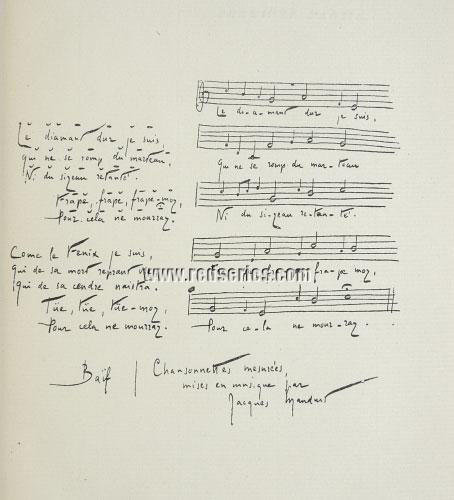 The chanson with the verses Le diamant dur je suis and Come le Fenix je suis by Jean-Antoine de Baïf (Venice 1532 – Paris 1589), set to music and published 1586 in the Chansonnettes mesurée de Jean-Antoine de Baïf by Jacques Mauduit (1557 Paris 1627). The former initiator and co-founder, the latter from 1581 principal musician of the Académie de musique et de poésie, that secret association under the patronage of Charles IX which aimed at reviving the ancient Greek metric in contemporary French poetry and music. 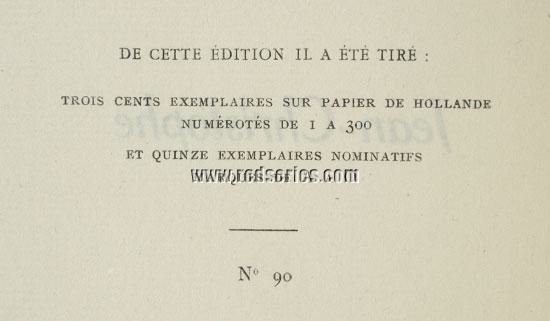 As a result of a previous wrapper the far edge of the white sheet following next to the front free endpaper of vols. I & III with slightly shaded/discolored longitudinal stripe 3 cm wide and that of the 3rd volume besides with four faint small/tiny fox spots. In this vol. only the white back of the lower free endpaper correspondingly slightly striped, while the white sheet following next shows the stripe likewise, but distinctly brownish. Otherwise of perfect freshness.

Nonetheless in its general composition evidently falling short of the one here: 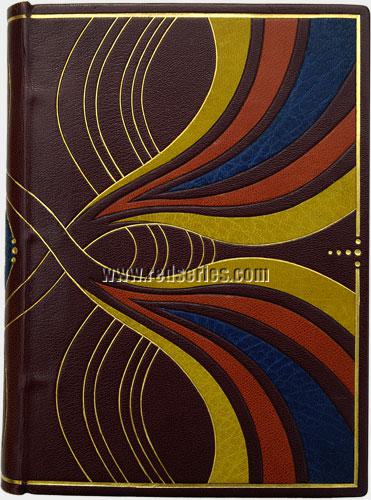 Lined by gilt fillets and crossing the spine and facing this,

as inner and center part dominants correspond with

The lining fillet interrupted in the middle of the boards and top & bottom of the spine by four gilt dots each tapering off inwards horizontally and vertically resp., above and below the farest of the middle of the boards again one dot each, from which four horizontal and three vertical dots result. Four times three dots interrupt the tooled gold line, too, of the oval blue spine label R. ROLLAND / JEAN / CHRISTOPHE / I (to IV).

The edges of the spine-ends gilt tooled with I II I II I II I. The headbands with eight orange-colored linings. The leading edges with single, the inner dentelles with triple fillet lining the paste-down, of which the one in the middle is wider. 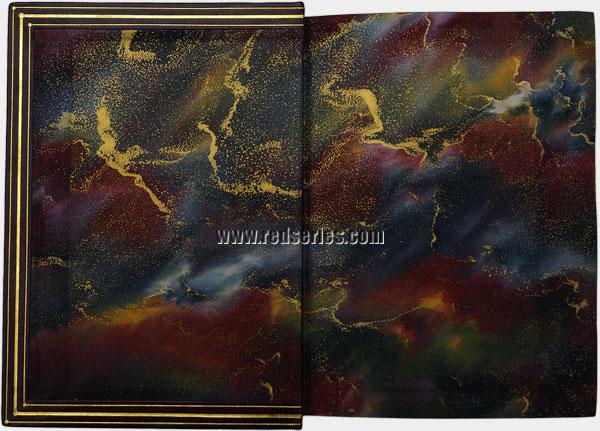 a firmament interspersed by gold dots and gold ribbons ,

an ecstacy , a dream , world within as antithesis of the exterior pretense .

The one as the other incredible reflection of the content , 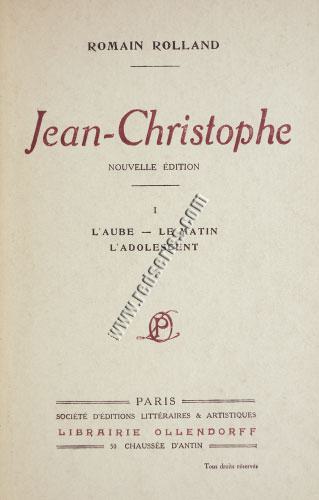 In whose present Jean-Christophe Krafft

German philologists, apparently either not having read the multivolume novel (initially published from February 1904 to October 1912 in the Cahiers de la Quinzaine) and copying from each other or probably for Teutonic jealousy that a Frenchman dared to transform the original German composer, merely see now a “fictive German composer” (German Wikipedia Jul. 4, 2017), now someone who “reminds of Beethoven in some traits of his character” (Laaths, Geschichte der Weltliteratur, 1953). Susanne Igler actually refers to the “Flemisch-German composer”, yet without relating him even remotely to Beethoven (Metzler Lexikon Weltliteratur, vol. III [2016], p. 154) where the hints are many indeed:

Right at the opening the grandfather welcomes the newborn by the words “How ugly he is!” while “From behind the house rises the murmuring of the river.” And later then “… everybody who thought he had reason to be annoyed with Christophe … did not fail to call to mind that he was not in fact pure German. His father’s family, it was remembered, came originally from Belgium” (recte Flandres). And may artistic license not have meeting still alive the mother dying at Bonn as was not granted to Beethoven? And while from the death bed in Vienna a “The comedy is over” has come down, it is the “Tragicomedy” in Paris. And further

“ The sweetness, the tribulation of friendship opening up the great human family through conflict to the isolated heart … The murmuring of the river rises from behind the house … Once more Christophe stood gazing down from the staircase window (see the scene in the 1954 DEFA documentary film Ludwig van Beethoven). All his life flowed before his eyes, like the Rhine … And Christophe … saw the river overflowing its banks, covering the fields, moving on, august, slow, almost still ” (each from the English translation by Gilbert Cannan).

having conceived the work initially in Rome in 1890 and starting in earnest in 1903 after the publication of his biography Vie de Beethoven the same year, stating by letter of September 13, 1902 to Malwida von Meysenbug (Choix de lettres à Malwida von Meysenbug, Cahier I [2012], p. 313):

“ My novel is the story of a life, from birth to death. My hero is a great German musician who is forced by circumstances to leave when he is 16-18 years old, to live outside of Germany, in Paris, in Italy, in Switzerland, etc. The setting is today’s Europe … In a nutshell,

the hero is Beethoven in the modern world …

I beg you not to speak of all this to anyone. You know the bizarre/peculiar law that governs artistic imagination (at least with some artists). It would be very difficult, if not impossible, to continue a work if I knew that others know it in advance/up front, and know that I work at it. So retain me the absolute secrecy: it’s for you alone. - I would like it to be finished, and you can read it then. I think you would like it. ”

It would take another seven decades before East German director Horst Seemann would build on Rolland’s statement, having Beethoven marching behind his ancient moving van amidst modern-day traffic on Vienna’s streets in the 1976 DEFA production Beethoven — Tage aus einem Leben / Days in a Life. 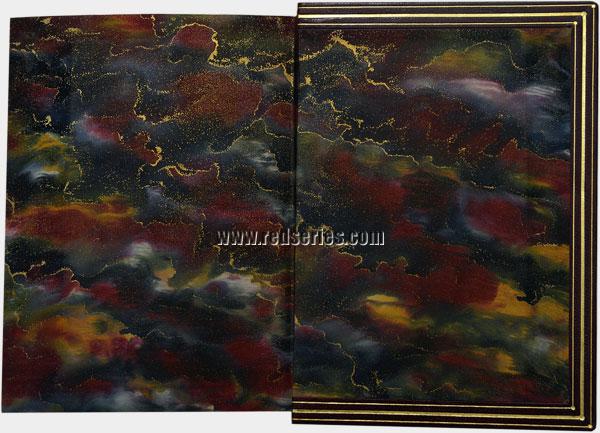 Back endpaper of vol. I

Announced only in November 1916, Romain Rolland was awarded the Nobel Prize for Literature in 1915 “as a tribute to the lofty idealism of his literary production and to the sympathy and love of truth with which he has described different types of human beings”, a statement particularly true for this epic roman-fleuve:

for which he has received the Nobel Prize in Literature in 1915,

“ This book does not aim solely at describing the life of the principal hero and his environment. It seeks also to describe the causes of the tragedy of a whole generation; it gives a sweeping picture of the secret labour that goes on in the hidden depths and by which nations, little by little, are enlightened; it covers all the domains of life and art; it contains everything essential that has been discussed or attempted in the intellectual world during the last decades; it achieves a new musical aesthetic; it contains sociological, political and ethnological, biological, literary, and artistic discussions and judgments, often of the highest interest. The artistic personality which is revealed in Jean-Christophe is one of rare resoluteness and strong moral structure …

“ The character study of Jean-Christophe is an inspired creation ,

astonishing in spontaneity, with individuality

in every trait , every movement , every thought .

“ Around this central, monumental figure, we find a whole series of characters of great human interest. Rolland’s observation is precise and profound. He penetrates to the depths of the beings whom he describes; he studies their characters and paints their souls with incomparable psychological art. His portraits of women, especially, are masterpieces. His characters come from all walks of life and are astonishingly true to type … ”

(Sven Söderman, Biographical-Critical Essay, Presentation of the Nobel Prize for Literature in 1915 [1916]).

Already in 1905 Rolland was awarded for Jean-Christophe the Prix La Vie heureuse (since 1922 Prix Femina), created by the all-female editors of the French monthly of the same name only the year before in response to the Prix Goncourt. And a century later the Encyclopædia Britannica extols

“ Rolland’s masterpiece, Jean-Christophe is one of the longest great novels ever written and is a prime example of the roman-fleuve (a long, multivolume novel cycle) in France. An epic in construction and style, rich in poetic feeling, Jean-Christophe presents the successive crises confronting a creative genius. The novel’s protagonist, Jean-Christophe Krafft, is a composer of German birth—modeled in part on Ludwig van Beethoven and in part on Rolland himself—who, despite discouragement and the stresses of his own turbulent personality, is inspired by love of life ”

is formed either by applying most accurately pared, colored pieces of leather onto the cover leather (leather application) or (as here)

as mosaic proper by inlaying equally thick pieces of leather

fitted most carefully against each other in the contours

into the whole ornamental plane (leather inlay or intarsia) … Also in the 19th cent. the technique was still in full vogue among the virtuosic French masters ”

of present copy of the Gutekunst Library. Among the holdings returned to the market recently aptly as regards the ex-libris also Ash’s Dogs. Their history and development of 1927 as no. 3/50 of the edition de luxe in pigskin. And the inventory number 8205, verified here for a juridical incunable, highlights the importance of this library grown in silence, her range and her beauty. Her Jean-Christophe dedicated

who are suffering , who are struggling , and who will triumph ” )

Beethoven was one of the purest 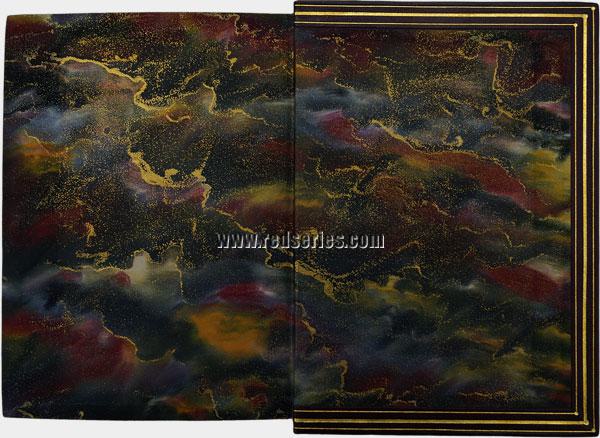 Back endpaper of vol. III

The First English Edition in the

Édition de Luxe of but 55 Copies
signed by the Author 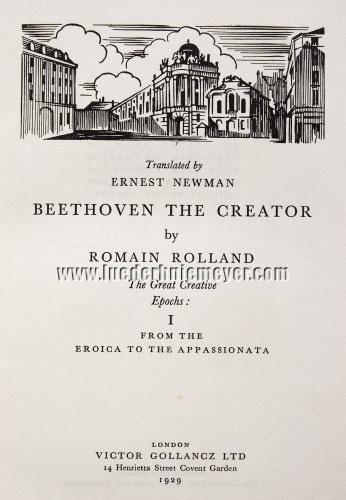 First English edition, one year after the French original, of the 2-vol. 1st part (supposedly all) of Rolland’s Les grandes époques créatices, whose likewise 2-vol. 2nd part Le chant de la résurrection. La Messe solennelle et les dernièrs sonates followed only in 1937 and has found obviously no continuation within the English edition here. In the BMC (now British Library Catalogue) only present 1st part and only as one of 55 copies, too. – With 168 pages Appendix ! 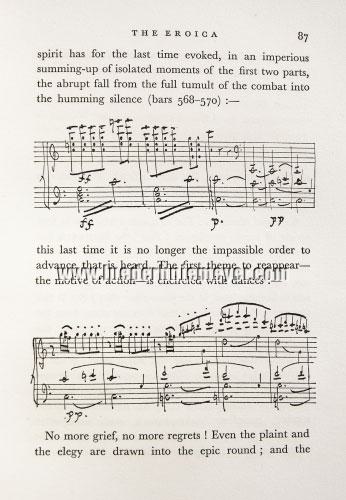 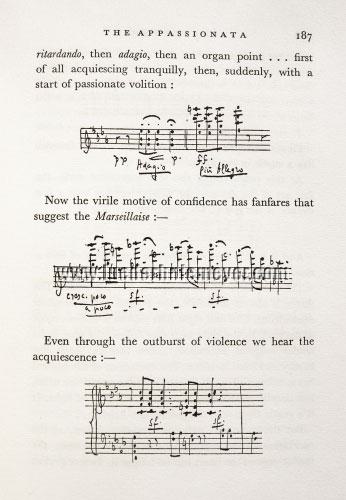 Spines of especially vol. II speckled with light brown (little) spots as to be found as isolated little spot also in the margins of the two final sheets of vol. I and, slightly larger, on its white endpaper and with some quite isolated further ones on a few previous pages, otherwise wonderfully fresh.

One of the only 55 copies 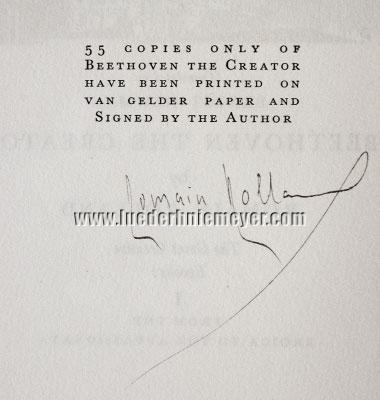 autographed by the author .