missing then also in the collection and sales catalogs

as in the retrospective exhibitions accompanied by profound catalogs. 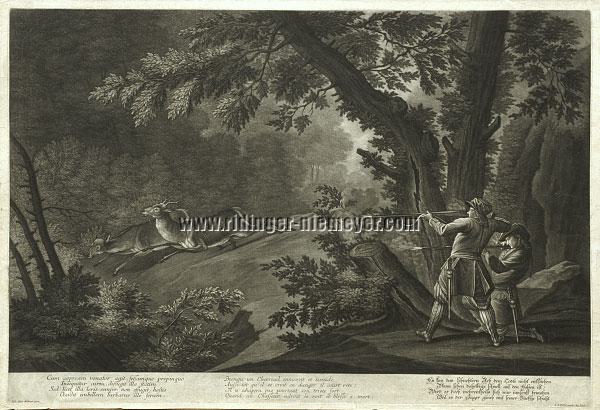 The shy roe cannot escape Death
Albeit it is quick on the feet;
For mostly it will trouble itself for nothing,
As the hunter just shoots it with his gun.

A couple roes flies along a clearing in the woods while on the right the two hunters – one kneeling – just fire.

By shooting and stabbing the wild boar
With hounds full of heat and fire is pursued,
Quite often his sharp tusk indeed seeks revenge,
Yet, before he knows it, he is brought to Death.

At the edge of the wood in the mountains five hounds, one at the boar’s neck, drive the tusker in full cry towards the two hunters. The one in front expecting him with the boar spear while the other aims the gun. Far right a third keeps a striated boar hound – comparable with the bear-biter Th. 1055 of the Molosser type from the Colored Animal Kingdom – forcefully back. 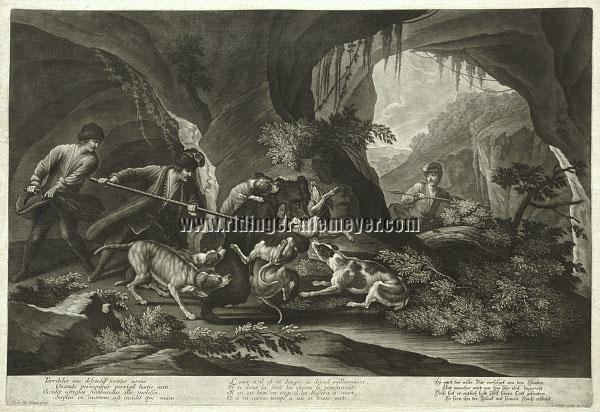 The wild bear is pursued by the hounds,
And many a one is mangled rather badly by him;
But soon he finally has met his Death himself,
Provided the Polack has stabbed him with his spear.

In a cave the bear has seized two hounds while himself at bay or seized by four more, with one of the hunters thrusting the spear into his side. A further hunter with spear at the entrance to the cave, a third one in the background, drawing the short sword.

The quail indeed is used to love solitude,
And wants to be in quiet pasture with her breed;
Yet by the spaniel she is discovered soon enough,
And falls into the net, before she knows it.

In open undulated landscape the spotted pointer stands the quail half hidden in the grass. Two hunt grooms hold the net ready, behind the master with the hawk on his fist.

All this then with wonderful chiaroscuro

and embedded into eye-catching adequate landscapes .

As then already 1901 Ernst Welisch qualified Ridinger as the indisputably “most important Augsburg landscapist of (his) time … albeit he is known mainly as animal painter”.

“ The mezzotints are hardly found in the trade … anymore …

(A)ll mezzotints created by and after Joh. El. Ridinger (are) so rare that they are to be found almost only in some public splendid print rooms ”

Thienemann stated already in 1856 (pages VIII & 270, spacing not in the original). For – so the expert von Sandrart 1675 – the delicate mezzotint plates only allow for about “50 or 60 clean prints … Afterwards yet (the image) wears off soon as it does not go deep into the copper”. Here, however, in

quite uniform even deep velvety qualities

as frequently so unobtainable for the collector .

Here besides with sheet sizes of c. 20⅝-21 × 30-30¼ in with 7-20 mm white paper margin around and note “Set (of) 4” along with cipher in pencil on the back of all four sheets and additionally on the boar sheet

where ultimately it does not matter if this is the result of the 1939 sale – the estimate was £ 4 – or the subsequent retail price of one the dealers participating in this “sellout” (Kurt Lindner).

through the various collections

is followed with enthusiasm ”

In the white margin around several small tears, mostly professionally done of old, of which but a few still extend barely perceivably into the subject or caption. Likewise not perceivable in the subject a certain crumpiness on the back, probably originating already from printing, and a larger water stain in the lateral part of the roe sheet. In such a way, however, unchanged

as quite especially worth mentioning with these oversizes .

And at the same time accountin for the provenance. For, so Kurt Lindner in his Memories of Carl Franz Georg Richard and Mathilde Schwerdt to the reprint of Schwerdt’s catalog Hunting, Hawking, Shooting (1985), p. IX, the quality, that is the state of preservation, of an object was the supreme criterion for Schwerdt:

“ Schwerdt expressed and justified this guiding principle in the building of his collection in the preface to the first volume, and yet the reader will not grasp the significance of his words …

“ Today, I dare say … that with the superb prints which he acquired he appreciated the state of preservation and quality of a sheet more than the subject it portrayed … Schwerdt was a man who loved surrounding himself with the choicest treasures from his favored field, hunting. ”