William Hogarth (1697 London 1764). (The Bruiser, C. Churchill … in the Character of a Russian Hercules.) The writer Churchill, whose Epistle to Hogarth had provoked the master, in the character of a sturdy bear, whose only diet seems to be full-flavored porter, licking at the fresh head. While the Club of Hercules remains in his left hand. For the epistle is already served by Hogarth’s favorite dog Trump in a manner not natural to the canine species. On the right further contemporary political innuendoes. Engraving by Thomas Cook (c. 1744 – London 1818). Inscribed: Designed by W. Hogarth. / Engraved by T. Cook. / London Published by G. G. & J. Robinson Paternoster Row June 1st. 1800. 14⅞ × 11⅜ in (37.8 × 28.9 cm).

Rarer sujet for which in the rush (August 1763) the self-portrait of 1749 had to serve, from which Hogarth removed himself right away to substitute in the oval the adversary. Various things he added yet, the titles of the folio volumes – the third volume without title here, too – were adapted: Great George Street A List of the Subscribers to the North Britons & A New way to Pay old Debts, a comedy by Massenger. Also in the face of such a brute The Line of Beauty fell victim to grinding. The print illustration now superimposing the palette no more taken over by Cook than the caption.

Churchill, a degenerated writing clergyman, was a partisan of John Wilkes for whose North Briton Gazette he worked and which is symbolized here as club, plastered with lies, see below, slaying the cartoon. However, as so frequently, the work grew far beyond its cause.

First the removal of the Beauty Line led directly to the Analysis complex:

“ Hogarth regarded the likeness to a bear as more insulting than it may generally appear; for him there was an aesthetic antithesis between the earlier and later significance of the plate. In The Analysis he wrote that ‘we may … lineally account for the ugliness of the … bear … which (is) totally devoid of this waving-line …’ ”

On the other hand the exchange of the image made at a late moment as an intellectual reflection:

“ There was nevertheless a quality akin to self-destruction in appropriating to his purpose the plate of his own portrait, which served as frontispiece to his collected works. ”

And ‘What may follow God knows. Finis.’ he meditated in this context. Yet

“ This was not quite the end of the story. Hogarth continued to work on his notes … and his concluding print ‘The Bathos’ was engraved in the following year ” (April).

(all Cat. Tate Gallery p. 89.) The Bruiser – bully, goon, churn – as thus penultimate work. By what the subject is considered closed. To prematurely to the opinion here.

For more outlasting time than the then quarrel the fact that Hogarth imposes the Russian bear, and therefore Russia, on the avowedly degenerate character of his adversary, yet at once ennobles the former by name, strength, and reputation of an absolutely positive demigod. In short,

son of Zeus with the club , the “National Hero of the Greek” ,

the executor of his immortal Twelve Labors

about the clearing of the Augean Stables.

“ … the image of his father Zeus on earth, strong above all, always victorious … a certain help in all peril … model of a gymnastically formed youth and man … he first appears as god of light who destroys all sinister and evil … [To the Hellene] he is

the model of resilient physical strength and unswerving courage …

Rarely [he] lacks the skin of a lion and the club ”

So Meyers Konversations-Lexikon, 4th ed., VIII [1888], pp. 394-399. And Agatha Christie has her Hercule Poirot evolve into an intellectual Hercules in 2 volumes. And on Charles Le Brun’s monumental painting Alexander the Great and Porus in May 326 B. C. in the Battle on the Hydaspes at Versailles we see

“ In the background on the far right there is a

golden statue of Hercules [with the Club].

Le Brun has taken pains to remind us that the meeting … took place in the Indian camp, for it is known that Eastern people had a custom of bringing images of

Hercules to the battlefield as a token of victory.

Indian tents spread off into the distance … ”

“ Nor blast the palm-branch in my hands, through which, if envy can be repelled, I shall equal Hercules and Bacchus. ”

There is no doubt that to Hogarth this significance was present without saying that this gaffe could have happened to him in his wrath against Mr. Churchill. Also the Seven Years’ War with i. a. England/Electoral Hanover against as well Russia had been, and indeed not least due to the separate peace of Czar Peter III, brought to a neutral termination. Were therefore the simultaneous derision of Russia – club of lies, see above – as a primitive bumpkin, permeating through the centuries to this day, nothing but the arrogance of the westerners towards the bear and their foolish attempts to reduce his territory? Cost what it may!

Cook “made his mark as Hogarth engraver, too, whose complete work he has engraved in copy” (Thieme-Becker) and whose original format he maintained contrary to all later Hogarth editions in the present first, earlier edition. For some sheets not published by Hogarth himself Cook became their first engraver, just as he also gained approval of a contemporary connoisseur as Maximilian Speck von Sternburg. 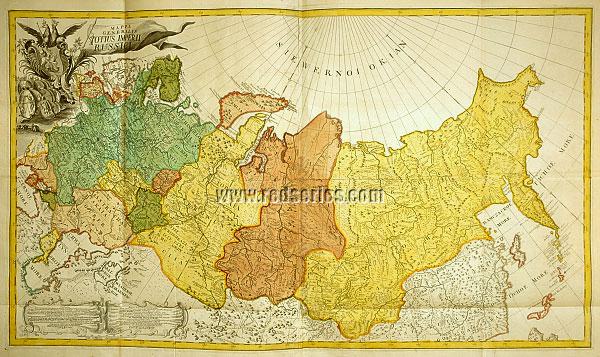 all in copperplate engraving with contemporary flat coloring.

Ruby Red Yuft Leather Volume with four decorative ribs enclosed by fillets, running over cover fillets, title stamp L’Empire de Russie on front and large double anchor of the contemporary Petersburg arms (1730-1856) as centerpiece on back cover, the lower part of its river anchor as corner pieces of both covers, all 23.5 carat gilt tooled, black backplate, brown pastedown & fly-leaf with gilt stampings, including on the back pastedown large ligated RS monogram as brand of the Red Series here as centerpiece as well as stamped red series and niemeyer fine arts resp. on the inner lower edges & JayAitchDesign on the back lower edge. Paled marble color edge. In uniform half yuft slipcase (20⅞ × 13 × 1⅛ in [53 × 33 × 3 cm]), the black Efalin paper cover coating of which repeat Petersburg’s Double Anchor in gilt. 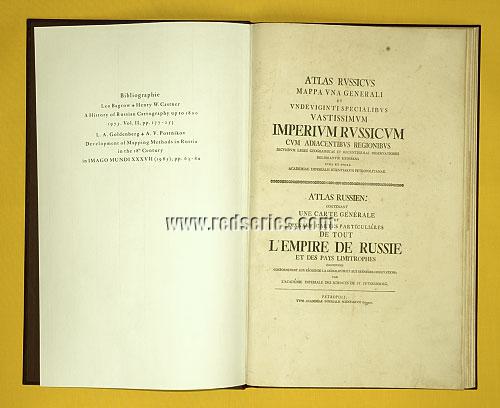 FIRST PRINT OF THE FIRST EDITION

compiled and published in Saint Petersburg by the Imperial Academy of Sciences founded by Peter in 1725.

Title & text – description of the maps regarding bordering, origin, accuracy and execution of surveying, transcription of the Russian alphabet; partly detailed Russian explanations of words; engraved rich conventional signs and symbols up to salterns & hot springs, this by the way engraved – in Latin & French parallel text (a Russian & German-language version still of the same year with fewer text preliminaries = Phillips 4059 and 3109 resp. each with erroneous comment to map 19 “showing the extreme point of Alaska and the Aleutian islands”, recte on the contrary Kamchatka & Kurile Islands).

Text part with the Honig watermarks HONIG / IV & large fleur de lis with crown with ligated pendant WR. – One map trimmed within the lower margin of the map, but without injuring of the subject itself, 5 maps trimmed on or with loss of upper or lower borderline resp., 1 map each trimmed within the white platemark at loss of miles indicator and numbering resp. Otherwise only isolated small backed margin tears and two not disturbing tear offs. 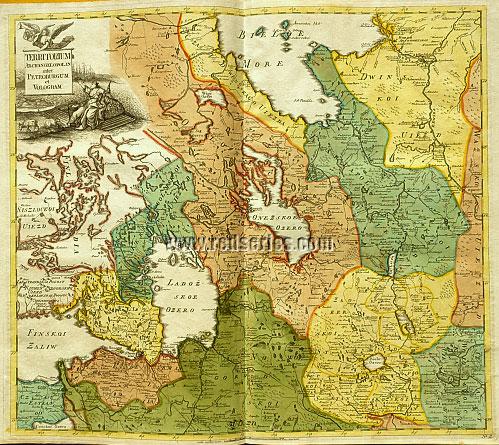 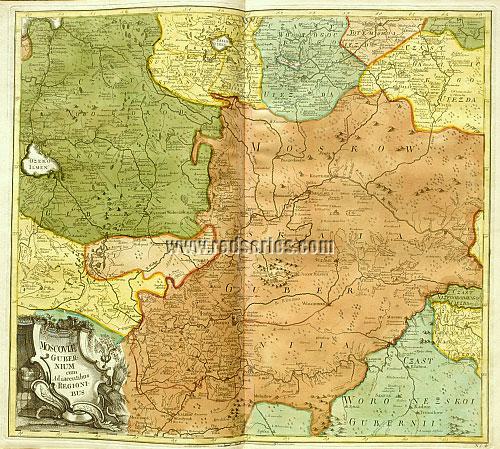 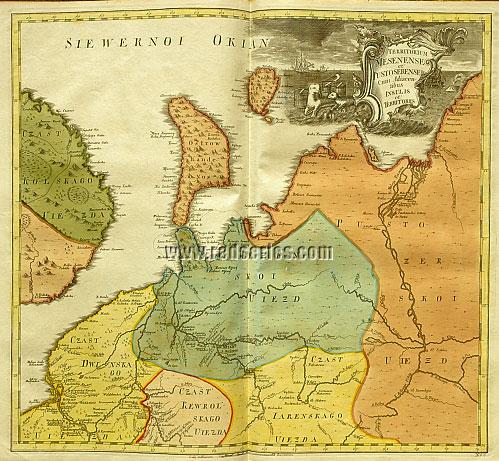 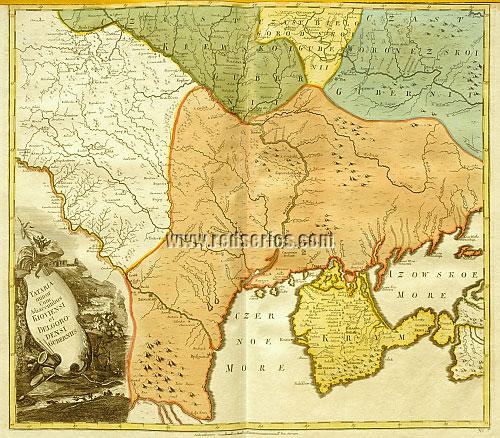 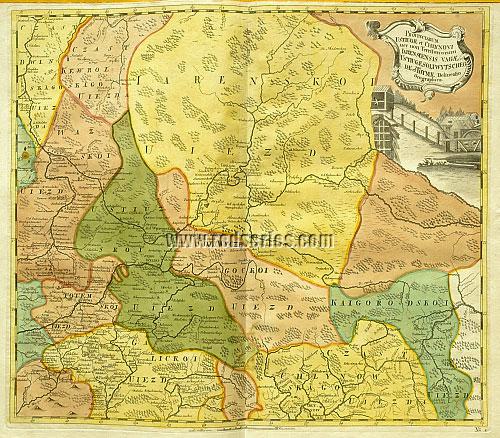 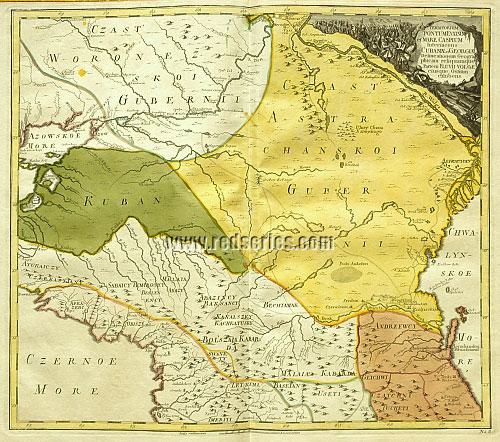 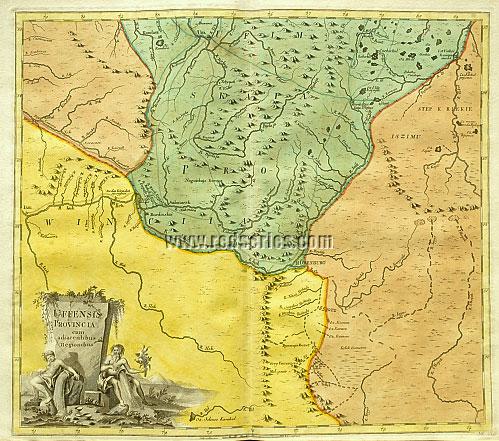 The deep coloring of all the quality of its age

with the cartouches, as frequently with contemporarily colored old atlases up to the legendary Atlas of the Great Elector, left in black and white. Occurring copies usually black and white only, at most colored in outline. Uncolored only then also the copy of the spectacular 1991 exhibition, see above.

As the first genuine complete atlas of Russia 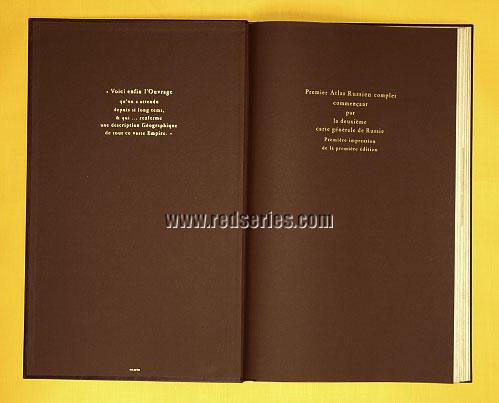 the decisive milestone on the way to modern Russia.

“ I am curious as to the history of this (original Ridinger printing) plate (I just bought) and the others you have offered. Did you purchase them from the Ridinger estate (indirectly, indeed) or a private collector? These are truly rare one of a kind pieces ”