their Ridinger sale 1958
with its lot no. 115 on the underlay carton

(1182-1226) in heavy penitential robe the cowl turned back with clear reference to his vision of a crucified seraph who “impressed (on him) under burning pain Jesus’ stigmata from which he got the name of the seraphic father, his order that of the seraphic brothers.” And

“ Despite the dislike of the founder of the order for art the Franciscan friars had a great influence on the development of Italian art, for they set the same comprehensive missions … The life and the miracles of Francis have been depicted in continuous cycles … One of them, the stigmatizing, i. e. the mystical transfer of the stigmata of Christ on Francis, remained motif of artistical representation up to the 18th century … Benedict XI granted the Friars Minor

a special feast of the Stigmata of Saint Francis

Already two years after his death St. Francis, likewise honored by Catholics, Protestants, and even non-Christians for “his unique simplicity and a pure grace of spirit” (Paul Sabatier, Life of St. Francis of Assisi), was canonized by Gregory IX, former Cardinal Ugolino and cardinal governor of the Franciscan order.

Common to all by the way their virtually entire missing on the market. Of those known to literature only Th. 1339 occurred in the well-equipped mezzotint section of Rosenthal’s Ridinger offer from 1940 (no. 420) + 1958 at Faber-Castell (123). So already in 1856 Thienemann resumed with a

A situation also possible new editions could change little as according to the expert Sandrart (1675) the technically conditioned extremely fast wearing off mezzotint plate only permits 50-60 good impressions. Ridinger’s remarkable interest in Francis of Assisi doubtlessly not least stimulated by a “He preached to the animals”.

Present in very fine, highly nuanced impression. And the intellectual content of the physical message reflected by the chiaroscuro. – With WANGEN watermark along with secondary mark as standing for contemporary impressions. The surrounding margin unevenly trimmed between the short extreme of 1 mm and 15 mm with mostly 10-15 mm on three sides. Two longer and three short traces of tears, each only minute, professionally restored and therefore without noticeably impairing of the also with respect to preservation very fine general impression. Backed besides three tiny tears in the white margin.

founder of the monastic order of Minims
closely connected with the “grey” Franciscan friars ,

as half-length figure in brown habit to the left. Looking up trustingly, the right presses a sheet with the inscription CHARITAS against the chest while the left holds the knotty stick as symbol of the wandering mendicant. Mezzotint. Inscribed: Ioh. El. Ridinger exc. Aug. Vind., otherwise as above. 20¼ × 16⅝ in (51.6 × 42.3 cm).

With watermark WANGEN as standing for contemporary impressions. – Two sides with mostly 5 mm margin, below 2 cm, on the right fine little margin getting close to the platemark on 3 cm. Generally rubbed and slightly time-marked with three backed margin tears, one of which reaching into the subject for 5.5 cm. On the back tidemark at the upper and upper right lateral edge.

Even surpassing the Order of St. Francis in strictness

the order of the Minims (Minimi fratres Eremitae) was founded by Franciscus de Paula (Paola, Calabria, 1416 – Plessis lès Tours 1507, his day is April 2) in 1435 and acknowledged as congregation by Sixtus IV in 1474.

“ The grant of all privileges of the mendicant orders … as well as the canonization of its founder (1519) contributed a lot to its spreading. In the middle of the 18th century (the order) had more than 450 monasteries with 25,000 religious in 31 provinces ”

The rarity of present very beautiful motif – worked certainly in acquaintance with the oil by José de Ribera (about 1590 – Naples 1562) in the Vienna Belvedere Gallery etched/engraved by Anton Joseph von Prenner (Wallerstein 1683 – probably Vienna 1761) in 1728/32; compare also with the supposed Ribera picture in Petersburg Kagané (1997) 99 with illustrations – preprogrammed by the way as according to expert Sandrart (1675) the technically conditioned extremely fast wearing off mezzotint plate permits 50-60 good impressions only as detailed already above.

St. Francis of Paula, founder of the monastic order of Minims closely connected with the “grey” Franciscan friars, as half-length figure in brown habit to the left. Looking up trustingly, the right presses a sheet with the inscription CHARITAS against the chest while the left holds the knotty stick as symbol of the wandering mendicant. Mezzotint. Inscribed: Ioh. El. Ridinger excud. Aug. V…(ind.). 24⅞ × 17¾ in (63.2 × 45.2 cm).

Following then the one here not verifiable elsewhere as now third described version , itself before the inscription in the mussel plate and like the second one with Baron Gutmann (Schwarz) with single line CHARITAS & “excud.” as supposedly also its … “Vind.”, of which here after restoring only a moreover deformed “V” remained, see below.

As with the letter the Stillfried version has to be considered the last one, which in addition is supported by its smallest format as determined for the general use. In analogy to this the Gutmann/Schwarz version as the largest one would be the first and present medium format the second.

With watermark WANGEN (center) as standing for contemporary impressions and large crown below. – With white margin 1.5 cm wide all round as indeed worth mentioning with the particularly large old mezzotints. – Generally only slightly age-marked, yet beside various smaller margin injuries two larger tear-offs at both the two lower corners outside the subject, on the right indeed under loss of the “Vind.” finishing the inscription, yet all of which restored professionally up to almost imperceptible re-drawing of the hatching and utterly smoothed center fold. The print itself quite fine.

The rarity of present very beautiful motif – not in the Dresden print room consulted by Thienemann as indeed discovered and described for the first time but 20 years later by count Stillfried – preprogrammed by the way as according to expert Sandrart (1675) the technically conditioned extremely fast wearing off mezzotint plate permits 50-60 good impressions only as already detailed above. And may the by now three versions documented here have been intended for three different clienteles, so at the same time they represent Sandrart’s imaginably smallest possible number of copies, the necessitation of painstaking and by this expensive production of new plates in case the market requires more, as the rule for the images of saints and thesis plates subjected to consumption increasing their scarceness. And last, but not least for the exciting motivation of the collector intent on completeness and pursuing this with a bloodhound’s passion.

S. Antonius de Padua. Half-length portrait of St. Anthony with elliptic gloriole sitting to the left, worshipping the child Jesus in his glory gliding in the clouds. The folded hands resting on an opened book, from under which a long blossom branch projects. Mezzotint. In the wide lower text margin inscribed as above. 20⅞ × 15¾ in (53.1 × 39.9 cm).

Of fine round about wide-marginedness: left 2 cm, above + right 2.5, below 3 cm. – The front of optically generally slightly age-marked general impression with, however, chiaroscuro of rich contrast. The white top margin on the back with mounting traces with two pertinent little holes.

Anthony (Lisbon 1195 – Padua 1231) “joined the Order of Augustinians in 1210, of St. Francis in 1220, traversed as mighty penitential preacher Southern France and Upper Italy … and was canonized by Gregory IX in 1232. According to the legend he shall have preached to the fish when men did not listen to him, therefore he is looked upon as patron of the animals in whose honor in Rome the feast of animal consecration is celebrated Jan. 17-25.

His mystic and ascetic writings were published with those of St. Francis .

The proven rarity of the present picture – missing even in the Dresden printroom and presented for the first time by Schwarz – already preprogrammed as according to expert Sandrart (1675) the technically conditioned extremely fast wearing off mezzotint plate permits 50-60 good impressions only as detailed above already. 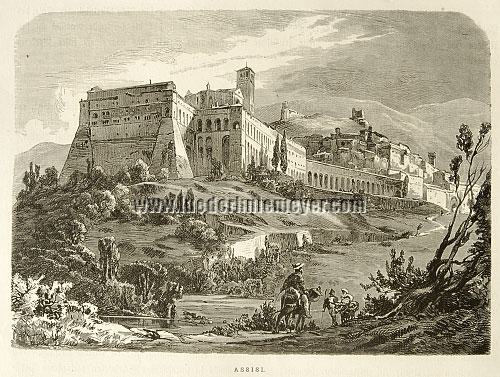