Still without the 3rd Hare

at which , however , one of the Hunters just aims

( “ wrote the initials of his name onto each sheet ” )

erroneously as The Spring of the Hounds as exhibited, too, + page 148/I

The preparatory drawing in reverse used for the transfer into the plate – recto traced, verso ruddled – of Thienemann 45 as sheet 33 – cf. comparative illustration –

of the Accomplished and Thorough Representations of the Excellent Princes’ Pleasure or the Noble Hunting … invented brought into Copper … Anno 1729. as Ridinger’s first hunting set now etched/engraved and published by himself and in accordance with the master’s continual didactic intent at the same time a practical instruction

“ … as such to the true character as also right application of all requisites belonging hereto necessary to each animal’s kind and manner, in particular, however, of those sportsmanlike terms usual hereto have been represented quite distinctly

and drawn from life ”.

The second hare is already shot down. On execution of the plate Ridinger seems to have noticed that the direction of the just aiming shooter’s barrel rather misses, otherwise is meant for the same target the neighbor already fires at. So he slightly changed the direction of the barrel, set the first of the two dogs somewhat back

and established in the free space a third hare .

On the other hand in the engraving the reserve gun leaning at the two already bagged hares is missing.

which found its own ways already early and therefore in 1830 did not pass with the 32-sheet (among which 2 duplicate versions) block of preparatory drawings to the Princes’ Pleasure into the immense Weigel inventory of the master’s bequest of drawings and therefore remained unknown to Thienemann (1856, page 274, a, “partly in brown ink and wash, partly in pencil and chalk”, the latter as also present here) just as to the Ridinger appendix of the 1869 catalog of the Collection of Original Drawings now bequeathed by J. A. G. Weigel.

Beside now present preparatory drawing of the hares Th. also lacked that of the Hunting with Hounds (Th. 46) to which an almost equal-sized detail drawing was traded here recently (Bavarian private collection) just as in the early ’90s the preparatory drawing used for the transfer into the plate of the Stags fallen into the Net (brown ink with wash over pencil, Rhenish private collection), Th. 24, which also missed Weigel/Thienemann and in which aptly before the net likewise a hare takes to his heels. 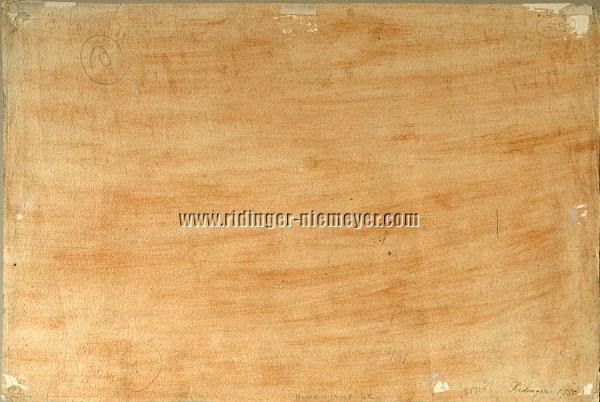 the master’s working process to be duplicated here ,

the desired look over his shoulder at the transfer into the plate. Beside the red chalk on the back the here especially manifold tracing of the important parts on the subject side the filling of which was done freely in the plate, yet is utterly executed here.

“ However, with the progress of the dexterity in the production of the (paper-)mould the refinement of the net increases, it becomes finer and finer. At times the papers of the eighteenth and early nineteenth century show such a fine web that looking through one can barely recognize it anymore. ”

The edge of the sheet somewhat age-marked with slight impairment of the “E” of the Peart initial. Here and there unobtrusively somewhat fox spotted, in the outer part of the subject below left a narrow 3 cm dirt stripe, otherwise of fine general impression.

From the collection of the physician practicing and publishing in London & Butterwick, Dr. Edward Peart (1756 or 1758 – Butterwick at Gainsborough 1824), “art connoisseur in London, started a collection of drawings and prints, and

wrote the initials of his name onto each sheet .”

By his hand supposedly also the inscription “Ridinger 1750” on the back below right, the latter put far too late. “This collection was scattered (per 1822)” (Nagler, 1860, continuing). From this then now here & now the master’s early hare hunting as

a Ridinger trouvaille of prime degree

set into an acid-free passepartout with 23.5-karat gilt stamped artist’s name and dates.

Drawings by his hand in such quality in regard of theme , execution and – size (!) require the favor of the moment already since long. niemeyer’s is proud to be able to present twenty years after the above Princes’ Pleasures drawing to Th. 24 used for the transfer into the plate now the one to Th. 45. Thereby both the one then as the present one unknown to literature and thus