Finest of the Finest

among the Drawings by Ridinger

On thin hand-made paper with typographic watermark. – On the back marginal marks of former mounting in points. Three repaired small marginal tears. Apart from that in perfect condition.

The fully executed drawing of origin

in the same direction, thus before its side-inverted version for the transfer on the plate, as preparatory for print 8 – Th. + Schwarz 76; Ridinger Catalog Darmstadt, 1999, V.11 with ills. – of the 1750 set of the etchings (in mixed technique with engraving) of the Ways to trap the Wild Animals. And by this

a quite exceptionally elitist collection item .

For Thienemann (1856, page 274, c) knew from this “most interesting work containing 28 (recte 30) fine and peculiar sheets” (Nagler 1843) drawn by Ridinger from life and etched/engraved by himself with the exception of 8 ones only 3 other preparatory drawings in the possession of Weigel. Provable besides the one in question and a still available further one (Spring-Gun on a Bear) seven others, of which four had been handed over here in pairs into an internationally magnificent private and important German Ridinger collection resp.

This first-rate 9-sheet block of the Ways to trap the Wild Animals, 7 or 8 of which in the direction of the print, originates from the “Group of the Painterlies” of that high-carat Westphalian collection by whose dissolution lasting for more than a decade beside i. a. sketches and proofs quite a number of quite extraordinary drawn unica found back onto the market, too, whose extraordinary charm is determined by their wash. The technique the master knew to win the whole plenty of painterly light effects and contrasting. These

(so F. A. C. Prestel on lot 71 of the 1879 Catalog of Marschall von Bieberstein’s Collection of Drawings with its rich Ridinger passages combined in 59 lots, among them the one mentioned from 1743 to the 11th Fable [Th. 775] as the one and only of this combination) form the distinguished

running, now inscribed, then remained unmarked, through the œuvre since the early 1720s in nevertheless obviously only most scarce examples representing like the watercolors and gouaches

a group of drawn rarissima on their own .

And, as said, unchanged fresh and not became discolored and in such a way admirable in the sense of George Keyes by example of Samuel van Hoogstraten’s (1627-1678) lavished John the Baptist in Prison of the Rudolf Collection (Introduction to part I of the catalog, 1977, regarding part II, 95 of the same year). And applicable to Ridinger, too:

“ (He) applies washes with a virtuosity and bravura

which add a wonderful aura to the subject .

His expressive intensity is as apparent today as when he executed this drawing … The number of wash drawings by Rembrandt and his pupils that are as fresh and vibrant as this one is pitifully small .” 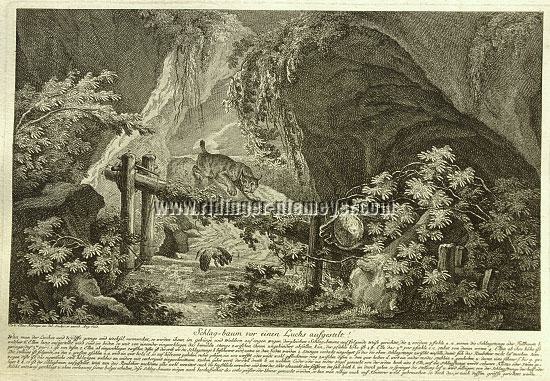