has quite often turned the Tide ! ”

Thienemann + Schwarz 722; Stubbe, Ridinger, 1966, pp. 16 f. with plate 34; Ridinger Catalog Darmstadt, 1999, IV.7 with ills. – Sheet 7 of the 8-sheet set of the Fights of Killing Animals, Th. 716-723, qualified of old by literature as very rare, whose four final sheets were transferred into the copper by the eldest, Martin Elias, after drawings – items 389-392 of the Ridinger appendix of the 1869 catalog of drawings left by J. A. G. Weigel with present no. 390 in pen & bistre – his father also only had followed up with in 1760. From which at the same time may be deduced that not only the drawings together with the texts for the socio-politically highly explosive sheets 1-4 had been ready since long, but even their plates, too.

The supplementation of that risky original set by four further ones with text now just à la Barthold Heinrich Brockes, 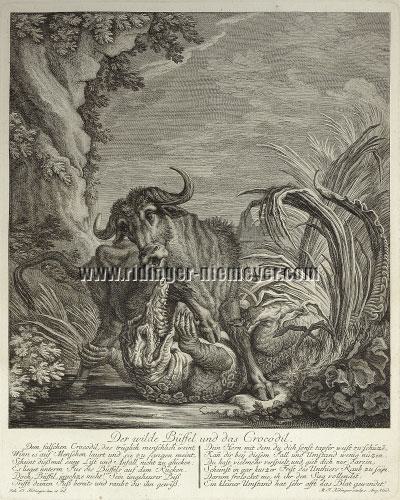 “ The deceitful crocodile, which cries falsely human, While it lurks for men and supposes to catch them, This time its cunning and attack seems to fail: It lies under the buffalo’s foot on the back. Yet, Buffalo, don’t rejoice! Its immense bite Hits your foot already and takes it for sure. Your horn by which you otherwise know to protect yourself bravely, Can help you little in this case and circumstance. You are rather through, and, resign yourself to it, Seem to be in quite short time the monster’s prey. Therefore never rejoice before you completed the victory: A little circumstance has quite often turned the tide! ”

and therefore harmless, beside the wish for a more comfortable sales unit quite certainly and intentionally for the purpose to let the striking message of the first four show less pointedly. The raise thus as an at the same time final outside wrapping.

To see here the driving force in Martin Elias corresponds very well with the character of the motor he assumed in just those years for the set of the “Wondrous”. For when in the 50s the father began to lose the interest in this large project and the set dozed during the Seven Years’ War with just five novelties, it was Martin Elias who revived the project about 1763 with the Hubertusburg badger as sheet 74 (Th. 316) and then in fact transferred with 21 of the final 27 sheets the lion’s share into the plate. Yet by this Martin Elias gains a meaning for the Ridinger publishing house which goes well beyond the hitherto existing perception of the predominantly co-working executing engraver, so still only recently Stefan Morét in the exhibition catalog Darmstadt 1999 (pages 62/3).

An engraver at least of nonetheless highest quality. So with the trained eye as a later director of the Hamburg Print Room Wolf Stubbe celebrates

the graphical-artistic zenith of present sheet

“ The animal fight sheet ‘The Wild Buffalo and the Crocodile’ belongs to the latest works of the artist (1760). By it it is easy to demonstrate how light and line contribute by interaction to the vitalization of the appearance. The impressive silhouette of the attacked (buffalo) … is … optically supported by the rapid light curves of the sheaf of Nile reed right of the buffalo and once more by the

curve of the crocodile’s tail running concentrically with these curves .

Towards the depth then, likewise based on reeds, an optical dramatization, for in the middle distance a now dark sheaf of reed runs in curved return, and finally in the background – now light again – the points of another sheaf of reed appear once more conversely, thus anew led parallel to the light reeds right at the front. ”

Since Stubbe judged on the basis of the engraving worked by Martin Elias, not of the drawn design, this one fully participates in what Stubbe outlines in regard of the Par force Hunt supposed for the mid-50s as “Ridinger’s mature art of engraving”.

As possibly created in connection with the set of the Fights Rainer Michaelis sees in the Critical Catalog of “The German Paintings of the 18th Century” of Staatliche Museen Berlin the fascinating painting “Beasts of Prey and Killed Stag” (Bln. 2002, serial cat. no. 2272, pp. 173 f. with color ills.) acquired there in 1985 from old Leipsic family property.

The vivid-strong, warm-toned impression from an old noble omnibus volume of old impressions on almost exclusively, so then here, too, uniform laid paper with varied watermarks, here Large Anchor with J H (not in Heawood). As in contrast to the first four sheets of the set already missing within Engelbrecht-Herzberg’s new Ridinger editions of 1824/25 and even more so in their late ones from the 1850s – in these also ll. 1-4 no longer present – sheets 5-8 are additionally scarce. The Weigel states 40 B & C (Art Stock Catalog XXVIII [1857], Ridinger appendix) for later and new impressions resp. cannot be classified chronologically here as of 8 sheet each, since in 1824/25 in just four sheets only and entirely missing in those of the 1850s as contemporary to Weigel. – Margins above & below 5-5.9 and laterally 2.3 cm wide.