Ridinger, Johann Elias (Ulm 1698 – Augsburg 1767). Big wild he-cat, dispensing justice among three wild ducks at the base of a pollarded willow. The smartest of them flies away, a second one still gives noise, while the third is already in execution under the fore paws of the authorities answering the protesting second one with “incensed eyes” (Brockes), crooked back and raised, incorrectly pointed (so also on Th. 1069 and, less poignant, Th. 471) tail. In the center dominating the he-cat, on the left both the two not seized ducks, on the right the willow. Red chalk. 13¼ × 8 in (337 × 202 mm) (subject size 11 × 8 in [278 × 202 mm]). 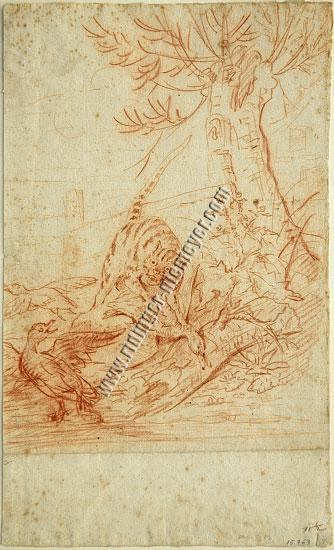 1810-1876
Chamberlain and retired Grand Ducal Baden captain in Karlsruhe
from the Baden line of the MvB with first mentioning in documents about 1198.
“The family held the office of the hereditary marshal
already with the oldest masters of the margraviate Meissen
and included this marshal’s office in the family name.
They received the surname by the possession of castle and village Bieberstein
between Nossen and Freiberg in Saxony.”
Son of the Baden minister of state Charles William Baron MvB
(Stuttgart 1763 – Karlsruhe 1817)?

Sale of his collection of drawings …
including a great number … of drawings by Joh. Elias Ridinger
Frankfort/Main, Prestel, 1879, no. 83 ( “ ingenious sketch ” )

Sale of his print collection ibid. 1877.

From 1877-1890 Reichstag deputy for the German Conservatives for Bautzen-Kamenz,
from 1881-1892 by royal appointment member of the 1st chamber of the Saxon parliament.

“ Of all the Ridinger works
which have been offered for public sale since long
with respect to completeness and quality
none can compare even approximately with the present … collection …
and in his purchases (the collector) considered
especially the rarities and undescribed sheets
which are represented in rich selection. ”

1836-1914, son of a Frankfort banker, independent gentleman in Berlin 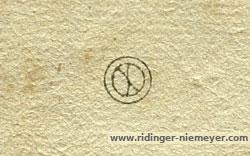 With just as rich as interesting ,

for the identification of which by means of Heawood, Briquet and secondary literature provide only marginal starting points. A smaller blazon seems to be inserted into a larger one, with both filled sophisticatedly. However, remarkable the upper outside marks:

Crowned on the left by miter with the cross on the globe, right of which set somewhat lower imperial crown with cross on the globe, as likewise belonging to. To the side of each crosier and sword resp. Typographical supposed producer pendant outside left G, outside right S.

The joint presence of ecclesiastical & profane insignia within the arms marks an obvious exception, so for instance Heawood 453 on a ms. paper not localized about 1690. Corresponding with the richness of present mark the quality of the strong, but light laid paper. On three sides still with its fine edge, on the left supposedly minimally shortened as an old bistre monogram (CS?, CG?) below the subject in the scant 6 cm wide white, formerly folded lower field appears cut.

Lower right in the latter a note in pencil “11 ½” traced tenderly in red ink. On the back below in pencil additionally “J. E. Ridinger, 1695-1767 / Samml. Reich, / Boerne 1894 / Skizze in Rotstein”. Set off from this and less deep additionally “440”. Goldschmidt’s collection stamp on the level of the subject. The certain foxspottedness in the subject itself largely in the marginal parts only and hardly perceived.

Trace of the Wild He-cat. Detail of the preparatory drawing (DJFM)

Thematically it is in its strongly eye-accentuated viewing direction to the left first the he-cat of the preparatory drawing in the German Hunt Museum Munich to sheet 18 (Th. 180) of December 1737 from the set of the Fair Game with the Large Traces published 1738-1740 – see plate XXV of the facsimile edition of the preparatory drawings of 1980 – consuming a snipe-like bird (Th. 1069: woodcock) there which Ridinger modified for the engraving, however, showing it concerned with itself. 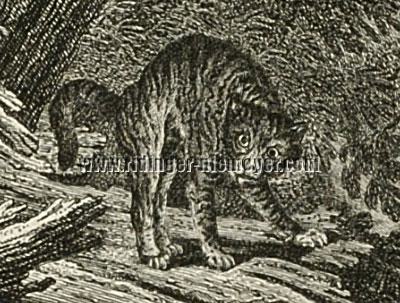 Then the same “incensed” look to the left and now also in its humpbackedness coming close to that of the drawing, yet without prey and thus a priori in own position, the he-cat upper right on sheet 24, Th. 219, of the Study of the Wild Animals from 1736 with Brockes’ poetry. And both times in linkage to a sturdy tree. With which its similarity ends though. 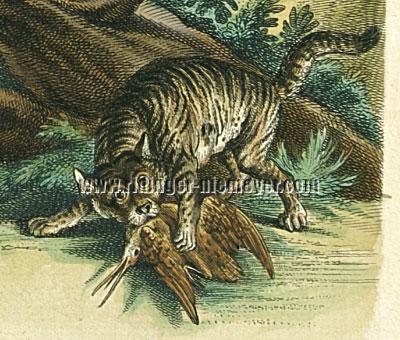 And finally above he-cat over his woodcock from 1737 as the lower one of the two of Th. 1069, the Wildcat or Male Cat of the Colored Animal Kingdom, as engraved version here now directed to the right. Yet based on a pen and ink drawing from 1755 worked expressly for this (Weigel, 1869, no. 743).

While now the trees of preparatory drawing/engraving to Th. 180 and engraving Th. 219 resp. are in painterly full foliage – greened also the foliage of Th. 1069, yet see below – , so the willow of present drawing presents itself in utter, indeed sketchy, yet in the differentiated treatment of the trunk’s bark by no means unappealing bareness. Such a branch/bough drawing is found in Ridinger’s engravings quite sporadically only and also surprises in its appearance in drawings. And considering the multitude of the vanity signs showing up in the œuvre now openly, now hidden the willow should be owed less to the sketchiness of the work than rather stand for a deliberate vanity symbol, elucidating the fate of the third duck. That that of the snipe 1069 of the Animal Kingdom is finished before a burst fallen trunk evidently supports this presumption. And moves present drawing less into the 1730s than into the second half of the 1750s, closing ranks chronologically probably even to the 1762 preparatory drawing to the yet utterly differently composed cat-duck theme of Th. 389.

And in just this timeframe not to be disregarded the plant stems at the right edge of the subject at the foot of the willow trunk, taking up the cat tail’s bending and in their turn curving to the right, sketching what in the 1760 drawing to Th. 722 of the same year Stubbe considers as essential compositional scheme as following:

curve of the crocodile’s tail running concentrically with these curves …”

and further reed parallels more in now curved return. As, suggested delicately only, here then left of the trunk, too.

That apart from that additionally just during the cataloging of this drawing a Dead Forest with similar trees by Max Pechstein from 1935 was seen (watercolor over pencil, Hauswedell & Nolte 434/I, 40) may surprise only a beginner. It may be tolerated to quote from the description there the beautiful concluding sentence: “The seemingly apocalyptic landscape reflects distinctly the pessimistic undertone and elementary disorder of the time.”

Present wild ducks will consent to this and gladly agree with the Ridingers who inscribed the said duck hunt in the engraving published 1770 posthumously so aptly “There indeed is nowhere in life a rest. The ducks bathe. The cat comes along” (together with the fox-duck pendant Th. 389/90 available here).

Yet under which aspect ever this drawing has to be looked at, it fascinates, it lives. In its immediacy, in its intellectual freshness beside which many a pictorially fully executed work might look quite statesmanlike. The dispute between he-cat and second duck, we literally hear it. With the low wailing of the executed one.

the catalog editors called this drawing 120/140 years ago out of their daily encounter with quite different a material than today. They knew how to see, saw with the eyes of the affectionate connoisseurs, esteemed the selective seizure of their previous owners.