And already 125 Years ago definitely Rare !

Each one already on its own — Yet here both together !!

Ridinger, Johann Elias (Ulm 1698 – Augsburg 1767). WORLD WORLD. The foxes fetched a banquet in the hen-house, yet at once dogs were set on them, and thus it is about feathers so about hairs. Two foxes – Thienemann comments – , one takes to his heels with a hen in the mouth, the other has dropped the killed cock to defend himself against a dog. Two further packers hurrying down an elevation to take part in the battle. / OH OH. The night owls consumed a poor little hare, so soon cats come along, too, and liked to take them together with the hare, there it is about hairs so about feathers. An eagle owl – Thienemann comments – , sitting on a captured hare, is attacked by two cats which want to take the hare from it. Above a second owl is about to fly down and prevent the heist.

The pair XXXIII/XXXIV with wave-shaped arched top of the 46-sheet set To the Special Events and Incidents at the Hunt (“The rarest set of Ridinger’s sporting line engravings”, Schwerdt 1928, and, so Thienemann, “arranged almost throughout so that always two by two harmonize with each other and form pendants, just as they have been sold in pairs, too” ) etched exclusively by Martin Elias after predominantly his father’s designs and concluded in 1779.

At which not only after realization here Martin Elias’ impact on the Ridinger œuvre is much larger than that of an engaged co-worker as engraver only. Already at an age of thirty he just acted as a spiritus rector behind the scene ensuring that sets were completed or, as here, published posthumously.

And as Wolf Stubbe (Joh. El. Ridinger, 1966, pp. 16 f. + pl. 34), going in medias res, celebrates Th. 722, The Wild Bison and the Crocodile, from the Fights of Killing Animals as an artistic zenith of the late work in respect of its luminous efficiency, he pays tribute together, because judging by the plate, not the drawing, to Martin Elias as the etcher/engraver of that work. An aspect illustrating deeply the Ridinger teamwork.

The captions quoted above supplemented by the mottos 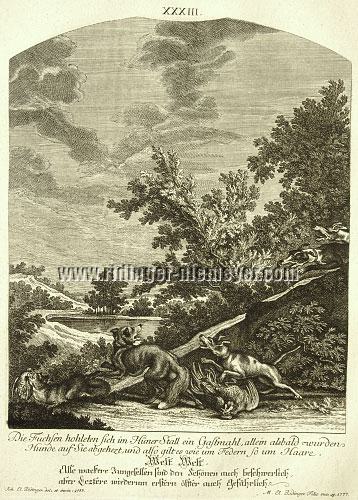 “ World World –
All brave bachelors are burdensome to the belles ,
but the latter in their turn often dangerous to the former ”, 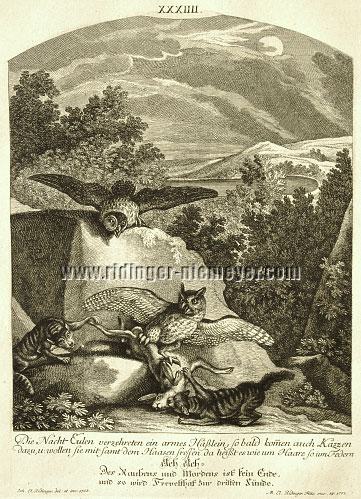 “ Oh Oh =
There is no end to robbing and killing ,
and so outrage becomes the third sin . ”

The motif of the eagle owls besides doubtless inspired Friedrich Gauermann (1807-1862) to his oil Fight between Foxes and an Eagle about a Dead Snow Grouse (Boetticher 64) then in the collection Prince Liechtenstein.

with the Roman numbers

(“If they are missing, so this indicates later impressions”, Th.). – In the far white upper margin still both the two pinholes from the original stitching in numbers, at the far right edge of pl. 34 small tidemark.