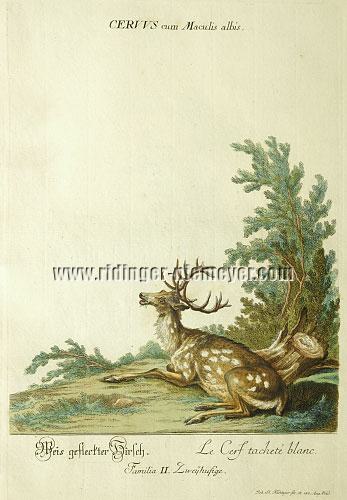 With Reason reckoned among the Most Noblest Creatures :

“ A Spotted Stag
which, however, are not frequent ”

Thienemann & Schwarz 1007. – IN THE RIDINGERS’ ORIGINAL COLORING from the unnumbered Colored Animal Kingdom created since 1754 and concluded finally posthumously not before 1773 (“Complete copies are next to untraceable”, so Weigel, Art Cat., sect. XXVIII, Ridinger Appendix 63a as merely 120-sheet torso, 1857 ! , but also just individual plates quite rarely on the market only at niemeyer’s presently nevertheless the one as the others). – Remaining uncolored contrary to the prospectus, a second edition from the plates shortened even under loss of animals and with modified titling and the Ridinger inscription removed, yet now numbered, was published by Engelbrecht/Herzberg in Augsburg 1824/25.

Final state with the Familia line within the caption moved up after the removal of the “Q. D. S. IX.” as reference to Jacob Theodor Klein’s Quadrupedum Dispositio brevisque Historia Naturalis of 1751, mentioned as missing “on some plates” by Thienemann, too.

With Klein (“Plinius Gedanensium”, Königsberg 1685 – Danzig 1759; town clerk in Danzig, co-founder and later director of the Danzig Society of Naturalists, member of the Royal Society, London, and honorary member of the Russian Academy of Sciences in Saint Petersburg; ADB XVI, 92 ff.), famous for his collections, Ridinger was in close communication and supported in his Colored Animal Kingdom undertaking in many ways, too. Following Klein’s classification according to kind and number of extremities – superceded by Linné’s anatomical classification – the early states of some plates of the set still show references to his Quadrupedum Dispositio brevisque Historia Naturalis of 1751, as known to Thienemann for some plates and documented here for several more by a complete copy available here. Ridinger himself emphasizes by the preface in his words of thanks “in particular the tremendously beautiful collection of P(rofessor). Klein of the Ludolph estate, which comprises nothing but original items.”

“ Certainly one can reckon these animals with reason among the most noble creatures as especially their build, their antlers, their strength, which goes along with the greatest possible speed, bestow an excellent and majestic eminence on them … Then one has to realize that these animals not always keep one color, but change it twice a year … Yet their finest color they have in early March … and in July and August they shoe in their greatest perfection … However, it cannot be denied that it greatly depends … what kind the ground is on which they live … Therefore some are according to the nature of the place where they stay commonly red … where a spotted one is represented, too, which, however, are not frequent … They are hunted, too … mostly for pleasure and by this the poor peasant is freed again from his uninvited guests ”

“ Yes please. I take that (further) copy.
I have now fetched the (last) parcel at the post office and I was very pleased. First of all: thank you for making so good parcel. I hate when I receive damaged copies because of bad envelopes. So once again: thank you very much for handling the items with such care! For me that is another word for seriousness and professionalism.
It was also a good copy and I liked it very much.
Please let me know if there is more items coming up ”