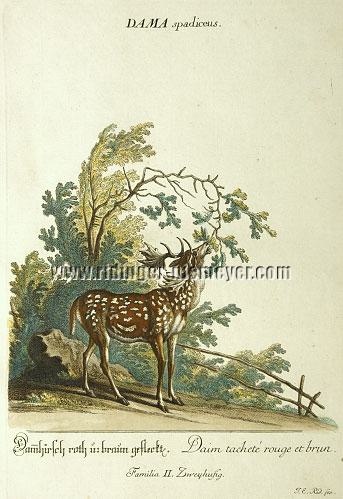 Thienemann & Schwarz 1015. – IN THE RIDINGERS’ ORIGINAL COLORING from the unnumbered Colored Animal Kingdom created since 1754 and concluded finally posthumously not before 1773 (“Complete copies are next to untraceable”, so Weigel, Art Cat., sect. XXVIII, Ridinger Appendix 63a as merely 120-sheet torso, 1857 ! , but also just individual plates quite rarely on the market only at niemeyer’s presently nevertheless the one as the others). – Remaining uncolored contrary to the prospectus, a second edition from the plates shortened even under loss of animals and with modified titling and the Ridinger inscription removed, yet now numbered, was published by Engelbrecht/Herzberg in Augsburg 1824/25.

“ Of this we have delivered by now five illustrations, that is one utterly white, one spotted grey, one spotted red or brown, one utterly blackish-red, and one mixed with three colors … they (are) slightly smaller than the … red deer and also have quite different antlers … They run … the woods and fields freely or fenced in, however, frequently are also kept in gardens or moats laid out especially for this … Their meat tastes even better than the meat of the red deer … The huntsmen call the adult … not fair, but they name them good or quite good stags with palmed head ” 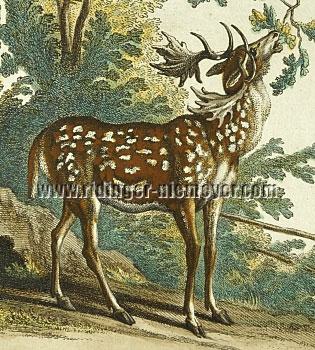 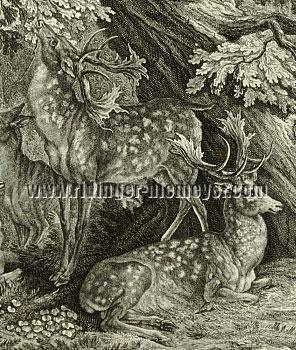 “… seems to be copied from the fine group of fallow deer with Brockes’s verses” (Th. 212) as the “lovliest sheet in the whole set” (Th.) of the Study of the Wild Animals and there merely standing to the left.