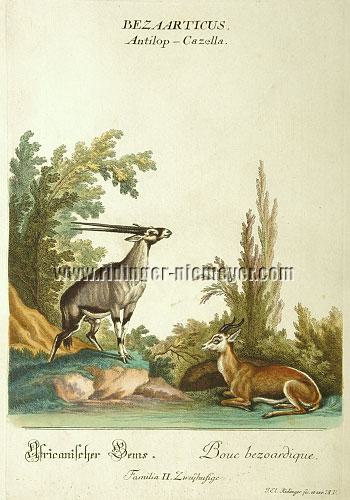 Thienemann & Schwarz 1001. – IN THE RIDINGERS’ ORIGINAL COLORING from the unnumbered Colored Animal Kingdom created since 1754 and concluded finally posthumously not before 1773 (“Complete copies are next to untraceable”, so Weigel, Art Cat., sect. XXVIII, Ridinger Appendix 63a as merely 120-sheet torso, 1857 ! , but also just individual plates quite rarely on the market only, at niemeyer’s presently nevertheless the one as the others). – Remaining uncolored contrary to the prospectus, a second edition from the plates shortened even under loss of animals and with modified titling and the Ridinger inscription removed, yet now numbered, was published by Engelbrecht/Herzberg in Augsburg 1824/25.

“ These two well-made representations Ridinger has done from nature or well taxidermied specimen, but the names are wrong. The one lying is the Springbok (Antilope euchore. Forster), the one standing, however, the Oryx (Antilope oryx) ”

(Thienemann, ignoring both Ridinger’s remark in the preamble on his model and the correct designation of the springbok there).

“ The representation of the same … has been drawn by myself from a taxidermied original … from the so-called Snake Land, hundred miles from the Cape of Good Hope … The inhabitants there call it lumdu. It is said to have to be feared particularly for its horns … shows in its fatherland a behavior very similar to our ibex … in regard (of its size it reaches) the most a donkey common hereabouts … The African Springbok, Antelope or Gazelle … was such very considerably smaller though and reached in size a roe. It was … shot, too, sixty miles from the Cape of Good Hope. By the way, in some parts it is similar to our chamois, but in the color and with respect to the lightness of its feet it is nobler ”

“as for this purpose it is the most decent and best”. – Margins on three sides 1.7-3.6 cm, below 4.7 cm wide. – At the far lower left paper margin slightly browned. – Painterly fine.

“ … I was digging and I found you. I needed to tell you that your collection for whatever reason has brought tears to my eyes. Thank you … I’m not a collector, or I haven’t known myself to be … I was going to sell this (sheet), but I just may have discovered that I’m to keep this for whatever reason. Have you made a collector out of me … For all your devotion, hardwork … I thank you ”