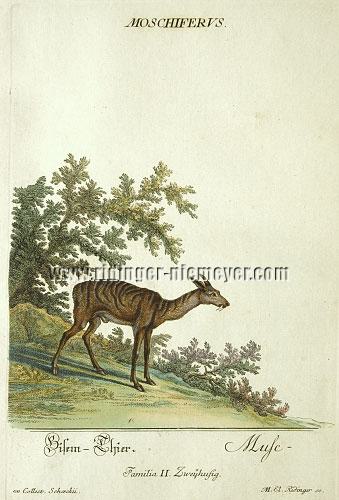 Thienemann & Schwarz 1004. – IN THE RIDINGERS’ ORIGINAL COLORING from the unnumbered Colored Animal Kingdom created since 1754 and concluded finally posthumously not before 1773 (“Complete copies are next to untraceable”, so Weigel, Art Cat., sect. XXVIII, Ridinger Appendix 63a as merely 120-sheet torso, 1857 ! , but also just individual plates quite rarely on the market only, at niemeyer’s presently nevertheless the one as the others). – Remaining uncolored contrary to the prospectus, a second edition from the plates shortened even under loss of animals and with modified titling and the Ridinger inscription removed, yet now numbered, was published by Engelbrecht/Herzberg in Augsburg 1824/25.

“ By the gracious contribution of some patrons we have received about three illustrations of this animal which are in very exact conformity with each other … This animal has two teeth in the upper jaw which hang down far beyond the lower jaw … It spreads a strong musk scent, too … The fatherland of these animals is China, Persia &c. and the Chinese are said to trade it in particular ”

The final state with the corrected French designation “Musc”

… and here before correction of the erroneous French designation “Civette”

The criticized early state documented here, too, by the Pfeiffer-Weinberg copy, which comes up with several further early states frequently unbeknownst to Thienemann.