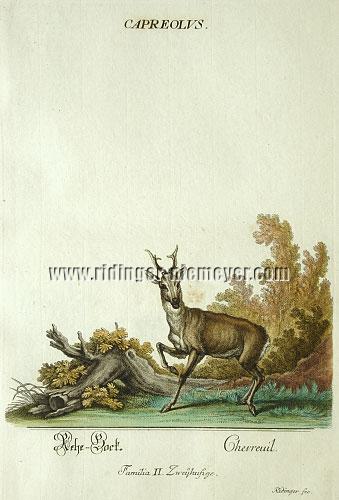 Thienemann & Schwarz 1020. – IN THE RIDINGERS’ ORIGINAL COLORING from the unnumbered Colored Animal Kingdom created since 1754 and concluded finally posthumously not before 1773 (“Complete copies are next to untraceable”, so Weigel, Art Cat., sect. XXVIII, Ridinger Appendix 63a as merely 120-sheet torso, 1857 ! , but also just individual plates quite rarely on the market only, at niemeyer’s presently nevertheless the one as the others). – Remaining uncolored contrary to the prospectus, a second edition from the plates shortened even under loss of animals and with modified titling and the Ridinger inscription removed, yet now numbered, was published by Engelbrecht/Herzberg in Augsburg 1824/25. 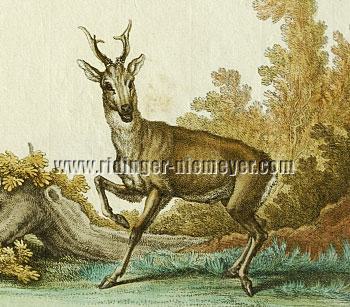 “ This animal one cannot regard without amazement as it owns a quite particular ease in running and leaping. Initially, if it starts quickly about something, it stands quite dazed indeed, yet recollects really soon and then the finest greyhounds have to struggle to overtake them in their quick running and leaping. In the first plate a buck is represented in his dark color which for the most part he has at wintertime … Their rutting is in December, the females or does carry twenty weeks and usually have two, at times also three young ones … They shed their antlers in November and set it up again completely setzen within three months … ”

“as for this purpose it is the most decent and best”. – Margins on three sides 2-3.3 cm, below 5.3 cm wide. – Above the buck’s neck hardly perceptible brown spot penetrating through from the back, a slightly bolder smaller one not perceptible from the front.