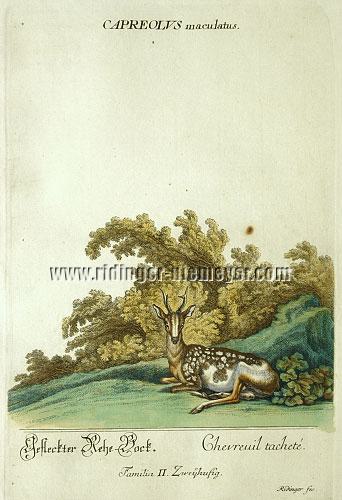 Thienemann & Schwarz 1021. – IN THE RIDINGERS’ ORIGINAL COLORING from the unnumbered Colored Animal Kingdom created since 1754 and concluded finally posthumously not before 1773 (“Complete copies are next to untraceable”, so Weigel, Art Cat., sect. XXVIII, Ridinger Appendix 63a as merely 120-sheet torso, 1857 ! , but also just individual plates quite rarely on the market only, at niemeyer’s presently nevertheless the one as the others). – Remaining uncolored contrary to the prospectus, a second edition from the plates shortened even under loss of animals and with modified titling and the Ridinger inscription removed, yet now numbered, was published by Engelbrecht/Herzberg in Augsburg 1824/25. 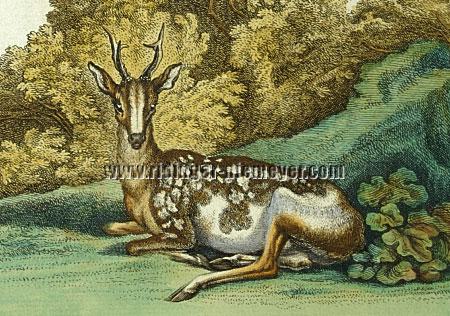 “ … a piebald kind whose like one rarely sees, which, however, is quite salient. These animals are quite often kept at great courts after they have been rendered useless for breeding and gelded … Only that way one has got as far with some that they became really tame, so that they … adopted a free run, strolled about in fields and woods and came home on their own at the proper time and hour, picked up the offered bred before a whole table of people … ”