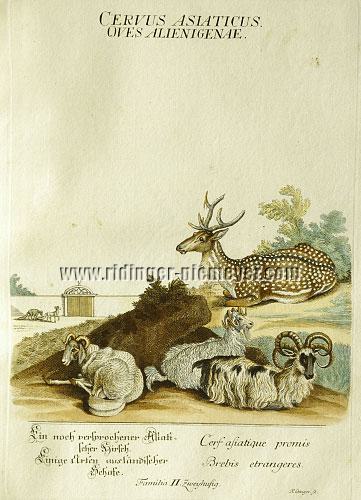 “ The Asian or Ganges Deer ”

“ … lives in the East Indian Plains and on the Adjacent Islands ”

The attribution of the work to Johann Elias’ eldest, Martin Elias, results first from the spelling considered here as individual – like a dot or comma between “Ridinger” and for instance “sc.” – as against such plates of the Animal Kingdom inscribed with his name. And then from the remark in the preamble

“ In future we will once provide an illustration of a species of Asian deer, which have been drawn from life (1774) and are spotted very nicely and regularly. This representation then will be the seventh figure (of the deer group). ”

“ The axis lives in the plains of East India and on the neighboring islands, wandering about at night in strong herds

and is an object of most eager hunting .

“ Of the (Indian) splendour prevailing in these parts, there are no stronger marks, than the extensive forests, in which are shut up untamed beasts of the grandest kind. A spacious wood, in which numerous unfailing springs give cheerfulness to the scenery, is selected, encompassed with a wall, and interspersed with towers for the reception of the hunters … ”

Martin Elias might have seen the axis all the more in a Hohenlohe park as Georg Adam Eger, acquainted to him already from the latter’s days in Darmstadt, seems to have been in service there during the 70s. Stag & deer of an axis are to be found, too, on Willem Frederick van Royen’s fine Berlin oil The Menagerie of Elector Frederick III of Brandenburg of 1697 at the Hunting Seat Grunewald (for ill. cf. Bol, Holländische Maler des 17. Jhdts., 1969, pp. 289 f.).