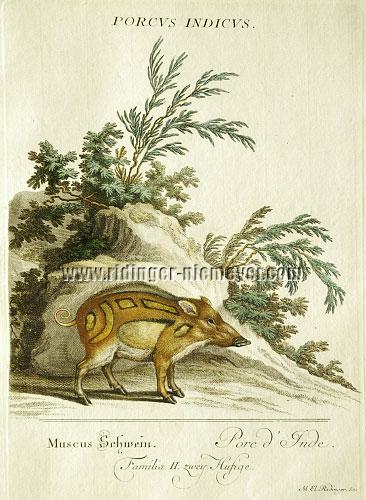 In addition to Thienemann’s aforesaid rejection just formally the designation of the plate is confusing as the related passage in the preamble – included here in copy – correctly describes the Mexican musk pig as purely South American, quoting the Danzig naturalist Jacob Theodor Klein as source. Introduced, however, in the preceding paragraph by

“ Both the following presentations of foreign pigs originating from India which are marked quite particularly … It is this the so-called Musk Pig, and the (now indeed East Indian) babirusa … ”

With Jacob Theodor Klein (“Plinius Gedanensium”, Königsberg 1685 – Danzig 1759; town clerk in Danzig, co-founder and later director of the Danzig Society of Naturalists, member of the Royal Society, London, and honorary member of the Russian Academy of Sciences in Saint Petersburg; ADB XVI, 92 ff.), famous for his collections, Ridinger was in close communication and supported in his Colored Animal Kingdom undertaking in many ways, too. Following Klein’s classification according to kind and number of extremities – superceded by Linné’s anatomical classification – the early states of some plates of the set still show references to his Quadrupedum Dispositio brevisque Historia Naturalis of 1751, as known to Thienemann for some plates and documented here for several more by a complete copy available here. Ridinger himself emphasizes by the preface in his words of thanks “in particular the tremendously beautiful collection of P(rofessor). Klein of the Ludolph estate, which comprises nothing but original items.”

“ … And I also received your wonderful documents on Charles Le Brun and the other wonderful images including the three-legged deer. Wonderful. Thank you so very much! … ”