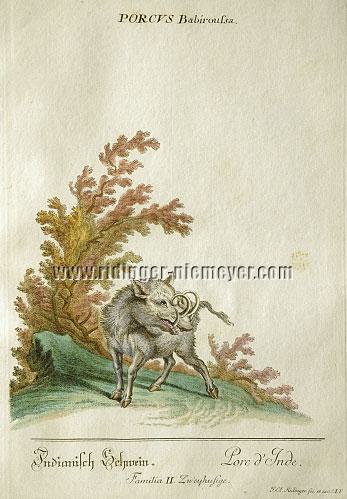 And Ridinger’s sons in the related passage of their preamble included here in copy :

“ The Babirus or Babyrousa actually means a boar deer. It is this an Indian animal one encounters primarily on the island of Buru. By size it equals a deer, by frame, snout and tail a pig, and by feet a buck. It has four bare long and curved teeth, of which two come out of the lower jawbone and two others in the nose bone pierce the flesh of the snout. ”

In such a manner Jacob Theodor Klein (“Plinius Gedanensium”, Königsberg 1685 – Danzig 1759; town clerk in Danzig, co-founder and later director of the Danzig Society of Naturalists, member of the Royal Society, London, and honorary member of the Russian Academy of Sciences in Saint Petersburg; ADB XVI, 92 ff.), famous for his collections and Ridinger’s source, had perfectly valid conceptions of the animal and Thienemann’s verdict

–“ A quite ill-conceived illustration of this curious animal, both in shape and color. Ridinger knew, just as Klein, only the skeletonized head, and so one has formed the rest from one’s own imagination. Really true representations one got from Paris only in our time (1856). ” –

appears excessively pedantic. For not only is the snout as ultimately of the most essential interest rendered perfectly correct, but also – according to Wikipedia – the relatively long and thin legs, the comparably long and thick hair coat – “both the other two species almost hairless” – point in the right direction and merely the rough and brown-grey coat is that of the now extinct Sulawesi babirusa instead of the gold-cream-colored or black tone as would be correct for the Buru species. Résumé:

For its time a meritoriously early representation .

“as for this purpose it is the most decent and best”. – Margins on three sides 2-3, below 4.5 cm wide. – Two really faint brown tiny spots in the right white plate area and the far paper edge.