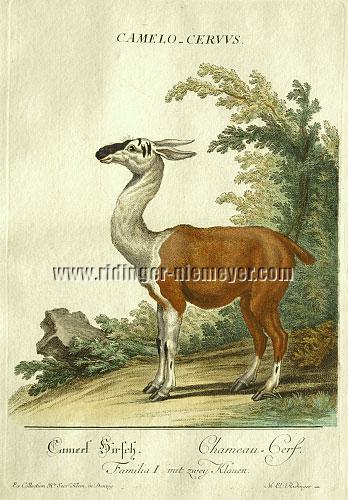 “ Again we have received the illustration of this animal from Ludolph’s (Klein’s) famous collection by the appreciable kindness of Mr. Secretary Klein. It is a particular creature and there is no doubt about its actual existence. Mr. Gessner already has described such one and gives Peru as the fatherland of the same … ”

“A well-done representation of this American animal rarely to be seen over here … head, neck, feet largely white, everything else fairly rusty-yellow … a llama which is found in freedom from times immemorial” (Th.), “has been reduced considerably due to hunting” (Meyers Konversations-Lexikon, 4th ed., X [1889], 420/I).

With watermark C & I Honig, similar to Heawood 3346 & 3348, as that sturdy Dutch quality paper Ridinger used in line with his preamble to the Principal Colors of Horses