Thienemann & Schwarz 1043. – IN THE RIDINGERS’ ORIGINAL COLORING from the unnumbered Colored Animal Kingdom created since 1754 and concluded finally posthumously not before 1773 (“Complete copies are next to untraceable”, so Weigel, Art Cat., part XXVIII, Ridinger Appendix 63a as merely 120-sheet torso, 1857 ! , but also just individual plates quite rarely on the market only, at niemeyer’s presently nevertheless the one as the others). – Remaining uncolored contrary to the prospectus, a second edition from the plates shortened even under loss of animals and with modified titling and the Ridinger inscription removed, yet now numbered, was published by Engelbrecht/Herzberg in Augsburg 1824/25. 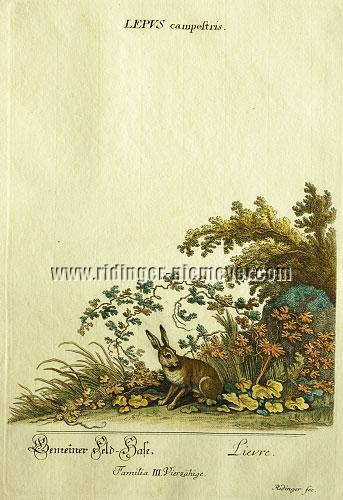 “ Indeed one finds diverse foreign kinds of these animals; yet since we lack true and exact representations of these, we rather intend to stay with our known home kind … Anyway, this animal is a very lively, yet also very timid creature. Of the wild species hares we have delivered here three illustrations, that is a common reddish one, a white one, and one spotted, which furthermore was cornuted; however, both the latter kinds are something rare. These animals breed, as is known, very much … Therefore their numbers would be inexpressibly large if on the other hand they had not many enemies and both the beasts and birds of prey and man reduced their number so considerably. One cannot see anything nicer but the hare moving from the field into the wood ”

“ The forefeet are five-toed, the hind ones four-toed, therefore Ridinger has set it into the third, yet Klein into the fourth family. ”

The fine sujet in its vibrant colorfulness

with watermark C & I Honig, similar to Heawood 3346 & 3348, as that sturdy Dutch quality paper Ridinger used in line with his preamble to the Principal Colors of Horses

The attribution of the transfer into copper to presumably Johann Elias’ eldest on the basis of the sole inscription “Ridinger fec.”. – Margins on three sides 2-3.5 cm, below 5.5 cm wide.