“ Even Cornuted Hares
are said to have existed … ”

Thienemann & Schwarz 1045. – DJM 5912 with illustration p. 158 merely from the uncolored new edition of 1824/25. – IN THE RIDINGERS’ ORIGINAL COLORING from the unnumbered Colored Animal Kingdom created since 1754 and concluded finally posthumously not before 1773 (“Complete copies are next to untraceable”, so Weigel, Art Cat., sect. XXVIII, Ridinger Appendix 63a as merely 120-sheet torso, 1857 ! , but also just individual plates quite rarely on the market only, at niemeyer’s presently nevertheless the one as the others). – Remaining uncolored contrary to the prospectus, a second edition from the plates shortened even under loss of animals and with modified titling and the Ridinger inscription removed, yet now numbered, was published by Engelbrecht/Herzberg in Augsburg 1824/25. 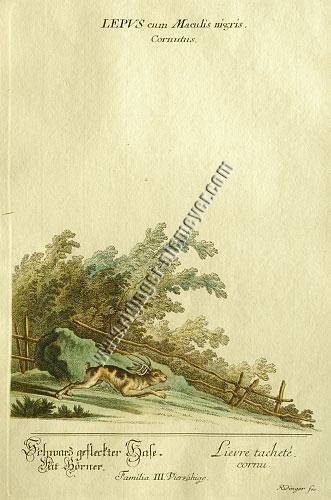 “ Of the wild species hares we have delivered here three illustrations, that is a common reddish one, a white one, and one spotted, which furthermore was cornuted; however, both the latter kinds are something rare ”

“ The cornuted hare ghosts through our hunt literature since the year 1602. Quite nice, too, what Mr. Buffon has to tell about:

‘Now and then lawless nature brings forth against her habit cornigerous hens, hinds, and does, therefore supposedly cornuted or deer hares, too … The famous naturalist of Danzig, Mr. Klein ( on whose collection Ridinger repeatedly drew for his Colored Animal Kingdom )

himself has owned such antlers in his collection

and Balbinus asserts, in the Norwegian it were not entirely uncommon to see suchlike animals’ … ”

“ Even cornuted hares are said to have existed. Yet I have to confess that I greatly doubt it, albeit experience teaches, that there are many freaks, or monstrosities, with the species of hares, e. g. hares with eight legs, two heads, four ears and the like … ”

Just as then already by his 1798 Neujahrs-Geschenk the electoral Hesse head forestry superintendent von Wildungen had shown himself converted from his original disbelief (p. 6):

“ However, since I have begun to collect more carefully everything that has been written or said ever since about this almost entirely inexplicable aberration of nature, I finally begin to convert from this disbelief, too. ”

To get two decades later, after comprehensive documentation of both supporting and doubting and refusing sources in literature as well as own dismissal of the roebuck-like hare antlers – as with present one, too (“Thus we find the animal illustrated, however, if in a cabinet, in nature one has never found such one”, Th.) – , finally at the real core of the matter:

“ However, that every so often such one might have been found, whose head indeed had distinguished itself, certainly not by true horns and even less by real antlers, but by outwardly hornlike excrescencies (exotosis) of the frontal bone – (still remarkable enough)! – I will by no means pronounce impossible ”

With watermark C & I Honig, similar to Heawood 3346 & 3348, as that sturdy Dutch quality paper Ridinger used in line with his preamble to the Principal Colors of Horses

The attribution of the transfer into copper to presumably Johann Elias’ eldest on the basis of the sole inscription “Ridinger fec.”. – Margins on three sides 2-3.5 cm, below 5.5 cm wide.