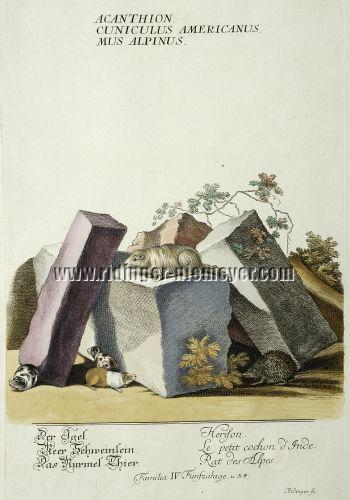 Thienemann & Schwarz 1049. – IN THE RIDINGERS’ ORIGINAL COLORING from the unnumbered Colored Animal Kingdom created since 1754 and concluded finally posthumously not before 1773 (“Complete copies are next to untraceable”, so Weigel, Art Cat., sect. XXVIII, Ridinger Appendix 63a as merely 120-sheet torso, 1857 ! , but also just individual plates quite rarely on the market only, at niemeyer’s presently nevertheless the one as the others). – Remaining uncolored contrary to the prospectus, a second edition from the plates shortened even under loss of animals and with modified titling and the Ridinger inscription removed, yet now numbered, was published by Engelbrecht/Herzberg in Augsburg 1824/25.

“ One finds (the marmots) on the highest Alps … they are easily tamed and usually are carried about by young folks in small cages and shown for money, since they then also have to learn to dance, which, however, is easy to them as in getting up and attending they have much similarity with the bears.

“ … more than anything else, however, (the hedgehogs) eat locusts, maybugs, mice, and the like … as soon as something gets too close to them they immediately roll up to a ball that one cannot harm them for on the upper part of the body they have nothing but spines. However, one says that the fox and a certain kind of dogs can master them nevertheless … If one wants to keep them in houses one has … not to trouble them much … where then by and by they will clean and free the house from all vermin ”

From the point of view here pedantic and without regard for the painterly pictorial effect if necessary always attained by scenery Thienemann’s fault-finding “(t)he animals again too small” as “Ridinger wanted to realize the untenable principle and do the animals in one scale”. A platework simply requires the uniform format and the connoisseur values its generous design and just for this dismisses the trimmed down, uncolored new edition of which Thienemann (p. 200) says many plates would look better now, yet has to admit that “also at the same time many tops of trees and shrubs, many decorations, indeed some animals had been taken away, too”. Indeed. One cannot have both at the same time.

The attribution of the work to Johann Elias’ eldest, Martin Elias, results from the spelling considered here as individual – like a dot or comma between “Ridinger” and for instance “sc.” – as against such plates of the Animal Kingdom inscribed with his name.

“ Thank you so much for your courtesy in keeping my request in mind. I hope that we can do business once day. With all the best wishes for the Christmas and holiday season to you ”