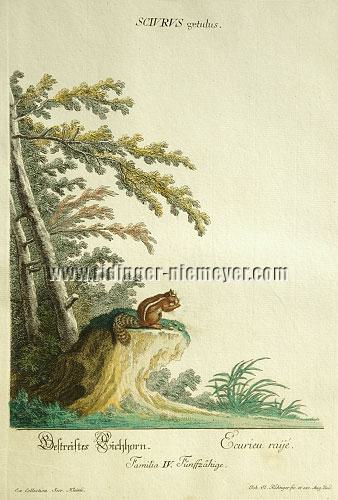 Thienemann & Schwarz 1048. – IN THE RIDINGERS’ ORIGINAL COLORING from the unnumbered Colored Animal Kingdom created since 1754 and concluded finally posthumously not before 1773 (“Complete copies are next to untraceable”, so Weigel, Art Cat., sect. XXVIII, Ridinger Appendix 63a as merely 120-sheet torso, 1857 ! , but also just individual plates quite rarely on the market only, at niemeyer’s presently nevertheless the one as the others). – Remaining uncolored contrary to the prospectus, a second edition from the plates shortened even under loss of animals and with modified titling and the Ridinger inscription removed, yet now numbered, was published by Engelbrecht/Herzberg in Augsburg 1824/25. 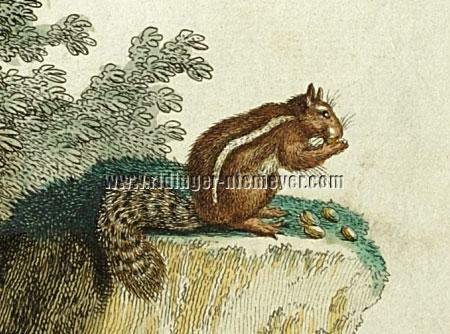 “ This lovely animal, especially the one which is called

the African or Sciurus getulus ,

has been depicted by us once before. Now another one follows which one calls

One finds them in America as well as in Russia, too. In the color they are different from ours, however, they can make a short flight in the manner of the bats … ”

Final state after the removal of the reference to Jacob Theodor Klein’s 1751 Quadrupedum Dispositio brevisque Historia Naturalis, in the first state, unbeknown to Thienemann, given as “Q.D.S.XII.”.

“as for this purpose it is the most decent and best”. – Margins on three sides 1.7-2.8 cm, below 4.9 cm wide. – Really tiny faint brown spot at the far left white lateral margin.