Thienemann & Schwarz 1047; Niemeyer, Ridinger Erlebnisse 1698-2020, 2021, p. 182 with ill. – IN THE RIDINGERS’ ORIGINAL COLORING from the unnumbered Colored Animal Kingdom created since 1754 and concluded finally posthumously not before 1773 (“Complete copies are next to untraceable”, so Weigel, Art Cat., sect. XXVIII, Ridinger Appendix 63a as merely 120-sheet torso, 1857 ! , but also just individual plates quite rarely on the market only at niemeyer’s currently the one as the others all the same). – Remaining uncolored contrary to the prospectus, a second edition from the plates shortened even under loss of animals and with modified titling and the Ridinger inscription removed, yet now numbered, was published by Engelbrecht/Herzberg in Augsburg 1824/25.

“ This lovely little animal, especially the one which is called the African or Sciurus getulus, has been illustrated by us once before. Now another one follows which is called the flying … One finds them in America as well as in Russia, too. In the color they are different from ours, they can do little flights in the manner of the bats … so we will remain with just the two kinds which are found in these parts, which are now yellow or dark red, yet now also blackish. Their abode actually are the woods, but they are easily tamed … (Of) the bats … there are two kinds with us, that is the long-eared and those with small ears. Elsewhere their number is larger, and their physique indeed deserves the consideration and tighter attention of the lovers of nature ” 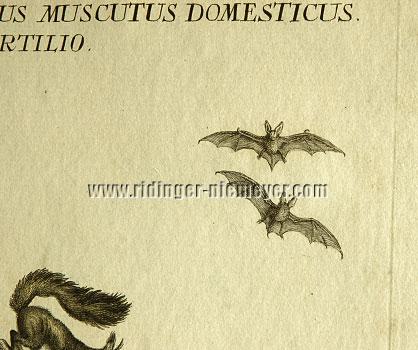 The two long-eared bats shown here top right in small, the one from front, the other from behind, dominate in the same position Th. 378 (sold) as the of old highly paid “Extremely rare” sheet XXXV of the Incidents set concluded 1779. They then also impart the present sheet its weight.

“as for this purpose it is the most decent and best”. – Margins on three sides 2.2-2.8 cm, below 5.3 cm wide. – Faint tidemark in the midst of the lower white plate/paper field and two narrow brown streaks below in the right white lateral margin.

“ My name is … and work for the Prado Museum as Senior Curator of 18th Century painting and Goya. I have seen your excellent webpage on Ridinger. The reason of contacting you is related to a research on Goya and its publication. There is a drawing with the subject of ‘Hannibal Cartaginensis’, probably by J. E. Ridinger … My questions are several, and I include photographs …

“ … thanking you for your mail and the very useful information you gave us. Your remarks on J. E. Ridinger and the drawing I sent to you are very interesting and, as I said, useful, because of your knowledge on the artist … Best regards, Yours sincerely, ”