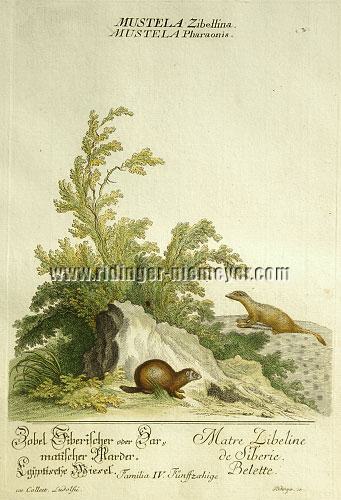 “ The Most Precious among all the Furs ”

Thienemann & Schwarz 1054. – IN THE RIDINGERS’ ORIGINAL COLORING from the unnumbered Colored Animal Kingdom created since 1754 and concluded finally posthumously not before 1773 (“Complete copies are next to untraceable”, so Weigel, Art Cat., sect. XXVIII, Ridinger Appendix 63a as merely 120-sheet torso, 1857 ! , but also just individual plates quite rarely on the market only, at niemeyer’s presently nevertheless the one as the others). – Remaining uncolored contrary to the prospectus, a second edition from the plates shortened even under loss of animals and with modified titling and the Ridinger inscription removed, yet now numbered, was published by Engelbrecht/Herzberg in Augsburg 1824/25.

The sable “is the most like the pine marten among the relations of the species … The shining silken coat, which is regarded already of old as

the most precious one among all the furs ,

costs the more the more unicolored it is … Most common it is presently still on Kamchatka where the almost inaccessible mountains provide refuge. In regard of its habits it is like our pine marten” (Meyers Konversations-Lexikon, 4th ed., XVI [1890], 948 f.). The present one of the preferred chestnut and darker color with relatively little white: 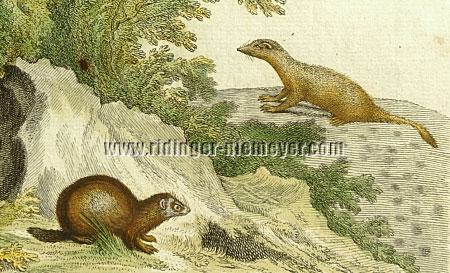 “ (S)o we have … at once represented yet a Siberian Sable, whose little skin is of great value with the Russians for its beauty, especially if it is black. Therefore they hunt for the same permanently and draw large sums of money each year from the sale of this fur good ”

And his sons in particular on present one:

“ Since we own an Egyptian Weasel – “supposedly the mongoose, Herpestes mungo” (Th.) – in quite good an illustration, which is a little larger than our weasel and has quite different a tail, we have added such one with this representation, too … ”

The attribution of the work to Johann Elias’ eldest, Martin Elias, results from the style regarded as individual – like a dot or comma between “Ridinger” and for instance “sc.” – as compared against such plates of the Animal Kingdom inscribed with his name.

“as for this purpose it is the most decent and best”. – Margins on three sides 1.7-3.2 cm, below 5.4 cm wide. – Tiny brown spot showing from the back within the shrubbery.