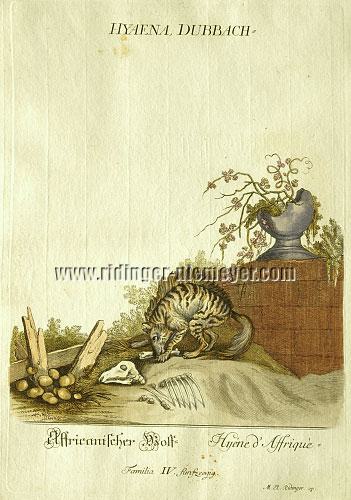 Ridinger, Johann Elias (Ulm 1698 – Augsburg 1767). African Wolf. The striped hyena below a mural vase of great vanity ambience with rich growth. “It has a skeleton before it and gnaws at a bone. That it is more ferocious than the wolf is not true. Being more cowardly, it mostly feeds on carrion” (Th.). Colored etching with engraving by Martin Elias Ridinger (1731 Augsburg 1780). Inscribed: HYAENA. DUBBACH= / Affricanischer Wolf=. / Hyéne d’Affriquè= / Familia IV. fünfzeegig. / M. El. Ridinger sp. 12⅜ × 8¼ in (31.5 × 21.1 cm).

Thienemann & Schwarz 1064. – IN THE RIDINGERS’ ORIGINAL COLORING from the unnumbered Colored Animal Kingdom created since 1754 and concluded finally posthumously not before 1773 (“Complete copies are next to untraceable”, so Weigel, Art Cat., sect. XXVIII, Ridinger Appendix 63a as merely 120-sheet torso, 1857 ! , but also just individual plates quite rarely on the market only, at niemeyer’s currently the one as the others all the same). – Remaining uncolored contrary to the prospectus, a second edition from the plates shortened even under loss of animals and with modified titling and the Ridinger inscription removed, yet now numbered, was published by Engelbrecht/Herzberg in Augsburg 1824/25.

“ This animal is not found in our regions, but its homeland are the warm countries of India and Africa. Its everlasting hunger makes that it is an animal as ferocious and ravenous as the wolf (yet cf. Th. above). It devours sundry meat without difference, even digs the dead corpses off the ground … The particular with this animal are the hairs it has on the back and which it can raise if it gets furious … It has a really solitary mode of life … and is said to fear nothing ”

“as for this purpose it is the most decent and best”. – Margins on three sides 1.5-3.5, below 4.3 cm wide. – Small faint trace of brown below the Y at the top edge inscription, otherwise enviably impeccable.

“ … And I also received your wonderful documents on Charles Le Brun and the other wonderful images including the three-legged deer. Wonderful. Thank you so very much! … ”