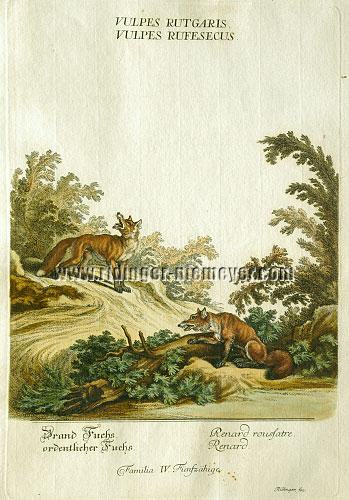 “ … make a Great Howling
at Night particularly in Wintertime ”

Thienemann & Schwarz 1063. – IN THE RIDINGERS’ ORIGINAL COLORING from the unnumbered Colored Animal Kingdom created since 1754 and concluded finally posthumously not before 1773 (“Complete copies are next to untraceable”, so Weigel, Art Cat., sect. XXVIII, Ridinger Appendix 63a as merely 120-sheet torso, 1857 ! , but also just individual plates quite rarely on the market only, at niemeyer’s presently nevertheless the one as the others). – Remaining uncolored contrary to the prospectus, a second edition from the plates shortened even under loss of animals and with modified titling and the Ridinger inscription removed, yet now numbered, was published by Engelbrecht/Herzberg in Augsburg 1824/25.

“ There are, as generally known, two kinds of this animal, that is light red and smoky red foxes. The difference which is found between them, is that those have more black and a brisker color at their hairs, whereas the light red foxes are of a lighter color … They are … chased very hard, especially at that period when their coat is the finest … In mating season they frequently pursue each other and make a great howling at night particularly in wintertime ”

Thienemann besides pointing out once more, “that the foxes designated here as different species belong to one species”. As further color variants blackish-brown as well as cross and – particularly desired – silver foxes should be mentioned.

The attribution of the work to Johann Elias’ eldest, Martin Elias, results from the style regarded as individual – like a dot or comma between “Ridinger” and for instance “fec.” – as compared against such plates of the Animal Kingdom inscribed with his name.

“as for this purpose it is the most decent and best”. – Margins on three sides 1.7-2.7 cm, below 4.5 cm wide. – Tiny little brown spots showing from the back at the Familia line in the white text field.

“ I would like to thank you most sincerely for your expert analysis of the portfolio and for the considerable amount of time you gave to this effort. I will take your advice and we shall see what happens … Again, my sincere thanks ”