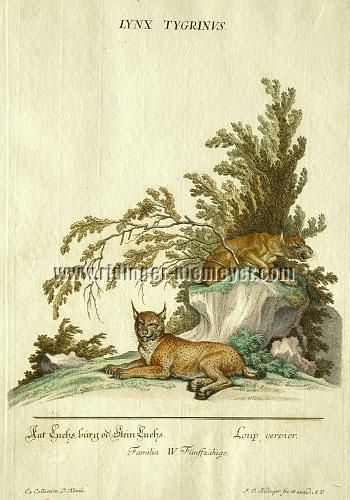 Thienemann & Schwarz 1070. – IN THE RIDINGERS’ ORIGINAL COLORING from the unnumbered Colored Animal Kingdom created since 1754 and concluded finally posthumously not before 1773 (“Complete copies are next to untraceable”, so Weigel, Art Cat., sect. XXVIII, Ridinger Appendix 63a as merely 120-sheet torso, 1857 ! , but also just individual plates quite rarely on the market only, at niemeyer’s presently nevertheless the one as the others). – Remaining uncolored contrary to the prospectus, a second edition from the plates shortened even under loss of animals and with modified titling and the Ridinger inscription removed, yet now numbered, was published by Engelbrecht/Herzberg in Augsburg 1824/25. 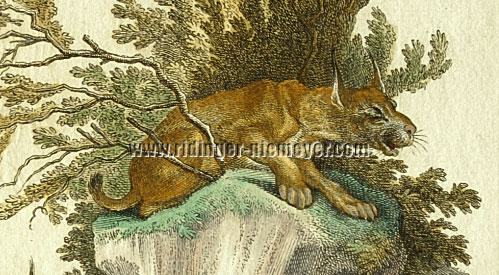 “ Below a strongly spotted bobcat, recumbent (to the left looking at the beholder), above a caracal (Turkish: black ear) … from Persia or Arabia lurking. It is then a quite well-done illustration from the Ludolf (Klein) collection ” (Th.). 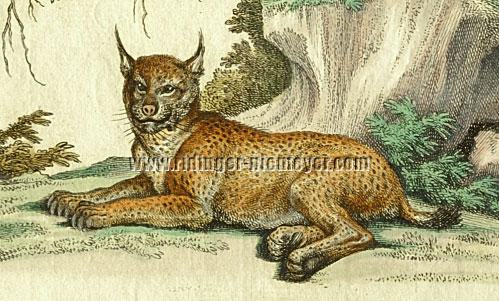 “ The lynx … is a particularly wrathful and pernicious animal for the hunting-ground, therefore one attempts to exterminate such one, as soon one has a trace of it, and to provide safety for the game … They are captured, too, by setting up so-called turnpikes for them (to Ridinger’s corresponding engraving Turnpike set up for a Lynx! both its original printing plate in reverse in the reddish-golden shine of its 270 years old copper and its washed original drawing available here) ”

“as for this purpose it is the most decent and best”. – Margins on three sides 1.4-3.2, below 4.8 cm wide. – Small faint spot accompanied by faint stain in the lower platemark as a precaution backed acid-freely.