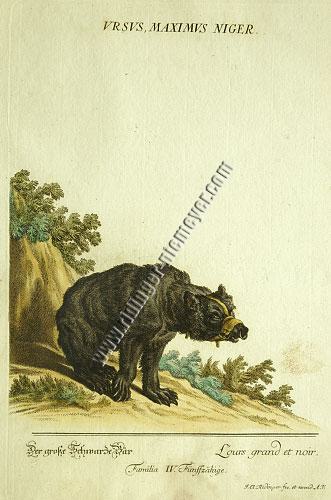 Thienemann & Schwarz 1079. – IN THE RIDINGERS’ ORIGINAL COLORING from the unnumbered Colored Animal Kingdom created since 1754 and concluded finally posthumously not before 1773 (“Complete copies are next to untraceable”, so Weigel, Art Cat., sect. XXVIII, Ridinger Appendix 63a as merely 120-sheet torso, 1857 ! , but also just individual plates quite rarely on the market only, at niemeyer’s presently nevertheless the one as the others). – Remaining uncolored contrary to the prospectus, a second edition from the plates shortened even under loss of animals and with modified titling and the Ridinger inscription removed, yet now numbered, was published by Engelbrecht/Herzberg in Augsburg 1824/25.

“ The bear belongs to the indigenous animals in Europe

The great black bear figures similarly as plate 2 in Ridinger’s numbered 4-plate set of the bears in black and white, too, (Th. 525-528), in which he “looks down in rage from a rock to which he clings. Excellent!”. So Th. 526, to continue:

“ I own this plate where the executed sky is omitted and the caption, the headline, too, is arranged

in the manner of the sheets intended for coloring .

However, I doubt that they have been used for this. I have seen several of this kind, but all in black only. ”

In the unrepeated 2-volume catalog of Ritter von Gutmann’s unique Ridinger collection – here available in the baron’s copy as No. I of the two Roman numbered ones in their featurewise noble extras – Ignaz Schwarz describes this state variant per 526a as follows:

“ Above the headline: ‘VRSVS major’. Below in the center of the German and French text: Q.D.S.XXV. Familia IV. Fünffzähige. ”

Thus quite in the manner of the plates of the Colored Animal Kingdom! As recurrently known there for first states with the Q.D.S.XXV. as the respective

Probably due to the bear’s high position Ridinger regarded this unsuitable for his Animal Kingdom, but convenient for the bear set, where in the course of the alteration the textual Animal Kingdom specifics remained in place. And Th.’s 526 variant – Schwarz 526a – proves to be the altered first state of present Animal Kingdom bear Th. 1079.

With Klein (“Plinius Gedanensium”, Königsberg 1685 – Danzig 1759; town clerk in Danzig, co-founder and later director of the Danzig Society of Naturalists, member of the Royal Society, London, and honorary member of the Russian Academy of Sciences in Saint Petersburg; ADB XVI, 92 ff.), famous for his collections, Ridinger was in close communication and supported in his Colored Animal Kingdom undertaking in many ways, too. Following Klein’s classification according to kind and number of extremities – superceded by Linné’s anatomical classification – the early states of some plates of the set still show references to his Quadrupedum Dispositio brevisque Historia Naturalis of 1751, as known to Thienemann for some plates and documented here for several more by a complete copy available here. Ridinger himself emphasizes by the preface in his words of thanks “in particular the tremendously beautiful collection of P(rofessor). Klein of the Ludolph estate, which comprises nothing but original items.”

“as for this purpose it is the most decent and best”. – Margins on three sides 1.4-3.2 cm, below 5.4 cm wide. – Faint tidemark in the lower white plate/paper field and two faint (little) brown spots in the white plate field right.