“ … received the Drawing
from Dresden ourselves … ”

Thienemann & Schwarz 1083. – IN THE RIDINGERS’ ORIGINAL COLORING from the unnumbered Colored Animal Kingdom created since 1754 and concluded finally posthumously not before 1773 (“Complete copies are next to untraceable”, so Weigel, Art Cat., sect. XXVIII, Ridinger Appendix 63a as merely 120-sheet torso, 1857 ! , but also just individual plates quite rarely on the market only, at niemeyer’s presently nevertheless the one as the others). – Remaining uncolored contrary to the prospectus, a second edition from the plates shortened even under loss of animals and with modified titling and the Ridinger inscription removed, yet now numbered, was published by Engelbrecht/Herzberg in Augsburg 1824/25. 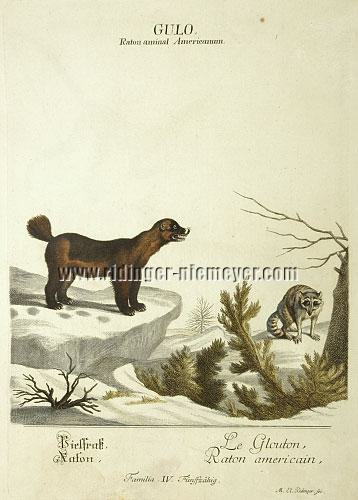 “ (The glutton) is to be found in the wildernesses in Russia, Poland, Lithuania, Courland, and Lapland, also in the regions of Asia and America towards the northern sea. It is said to live in the trees, as the lynxes, and

chase in particular the reindeer ,

onto which it leaps down and kills them, so that it does great damage among these animals …

For its fine gloss the fur

is held in very high esteem and almost equal to the sables ,

even though it has somewhat harder hairs …

One has brought one from Siberia to Dresden alive ,

which has eaten up 13. pounds meat in one day and yet still remained hungry. Of this we have received the drawing from Dresden ourselves and therefore are able to

provide this illustration from nature herself ”

“ (The glutton) … was found (previously) southerly up to the Alps, now (1890) only up to southern Norway and Finnmark; it prefers the bare heights of the mountains … is enormously strong and wild and in danger it offers resistance also to men … according to others (its name) origins (from the Swedish) Fjäl-Fräs and means rock cat. ” 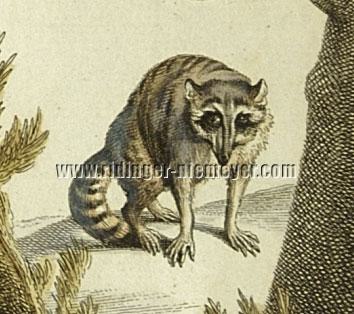 Once limited to North America and there then “largely repressed by persecution” (Meyers), the raccoon of the family of the bears now since long a fellow member in Europe, too:

“ Its range extends over the whole of the United States, and stretches on the west northwards to Alaska and southwards well into Central America, where it attains its maximum size ”

The attribution of the work to Johann Elias’ eldest, Martin Elias, results from the spelling considered here as individual – like a dot or comma between “Ridinger” and for instance “sc.” – as against such plates of the Animal Kingdom inscribed with his name and is supported here furthermore by the text in the sons’s preamble (“Of this we have received the drawing from Dresden ourselves”, see above). Glutton and raccoon besides also missing among Weigel’s 119 drawings to the set, predominantly dated 1754 and documenting almost all plates (Weigel, Johann Elias Ridinger’s Kunstnachlass in Handzeichnungen [1869], 659-777).

“as for this purpose it is the most decent and best”. – Margins on three sides 1.8-2.8 cm, below 5 cm wide. – Faint tidemark left/center of the lower white plate/paper field. An original fine box pleat center left of the white paper margin extending to the edge of the subject. The right edge of the sheet in the upper half minimally fissured.

“ Received the (original Ridinger printing) plate yesterday. Much Thanks from a satisfied customer. You are a True Gentleman … All the Best! L… F. ”