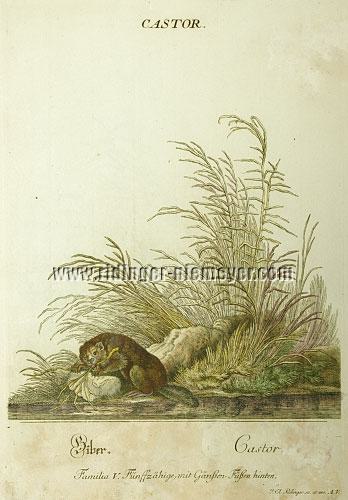 “ Returned among others the beaver ,
and this meanwhile in such numbers
that he poses a problem ”

Thienemann & Schwarz 1095. – IN THE RIDINGERS’ ORIGINAL COLORING from the unnumbered Colored Animal Kingdom created since 1754 and concluded finally posthumously not before 1773 (“Complete copies are next to untraceable”, so Weigel, Art Cat., sect. XXVIII, Ridinger Appendix 63a as merely 120-sheet torso, 1857 ! , but also just individual plates quite rarely on the market only, at niemeyer’s presently nevertheless the one as the others). – Remaining uncolored contrary to the prospectus, a second edition from the plates shortened even under loss of animals and with modified titling and the Ridinger inscription removed, yet now numbered, was published by Engelbrecht/Herzberg in Augsburg 1824/25.

“ These animals one finds frequently in both Germany and many other countries. As useful as these animals become by the good fur … as detrimental they are to the young wood which they debark and the rivers and water for they are very skilful divers and also go out on fishing. Their building which they do with great skill like a cauldron for themselves and their young ones indeed deserves much admiration. They mostly live in the water and even if they … sit on top of their building and in the sun their tail has to hang down into the water … Both it and the beaver’s meat in general, which tastes very fishy, are eaten and reckoned among the Lenten fare ”

One of the four sheets of the set printed in green and additionally colored (“… like the [previous, Th. 1094, the Otter], both quite appealing sheets”, Th.). – With typographic watermark C & I Honig as that sturdy Dutch quality paper Ridinger used in line with his preamble to the Principal Colors of Horses

“as for this purpose it is the most decent and best”. – Margins on three sides 1.7-2.5 cm, below 4.8 cm wide. – Text field & white lower margin relatively faintly, on the back more, waterstained. Fine trace of a 4 cm tear at the lower platemark backed acid-freely. The pictorial effect still almost flawless, particularly matted as being delivered.

“ I have received the copy of Schoenberg’s Harmonielehre … I am very pleased with it. Thank you very much for your help ”