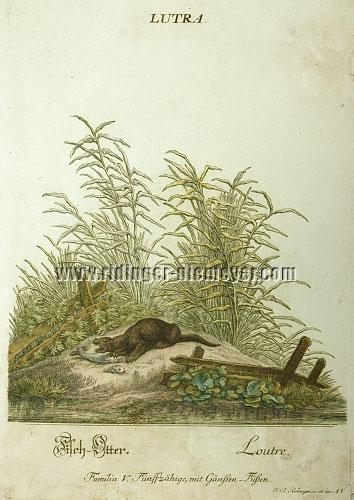 Thienemann & Schwarz 1094. – IN THE RIDINGERS’ ORIGINAL COLORING from the unnumbered Colored Animal Kingdom created since 1754 and concluded finally posthumously not before 1773 (“Complete copies are next to untraceable”, so Weigel, Art Cat., sect. XXVIII, Ridinger Appendix 63a as merely 120-sheet torso, 1857 ! , but also just individual plates quite rarely on the market only, at niemeyer’s presently nevertheless the one as the others). – Remaining uncolored contrary to the prospectus, a second edition from the plates shortened even under loss of animals and with modified titling and the Ridinger inscription removed, yet now numbered, was published by Engelbrecht/Herzberg in Augsburg 1824/25.

“ These animals have much similarity with the previous one (the beaver), only they look a little thinner and also have a different tail and a different fur. Their sustenance consists of all kinds of fish, especially trout and crabs … if they capture small fish they are devoured immediately as a whole, of the larger ones they leave the head and spine behind. So if one sees by a pond that here and there half eaten fish lie about, one can certainly conclude the presence of an otter … where one then can get ready to shoot at them, although one has to have much patience for this … At some places they are larger and smaller, also they frequently vary in the darker and lighter color ”

One of the four sheets of the set printed in green and additionally colored (“… like the following [Th. 1095, the Beaver], both quite appealing sheets”, Th.). – Watermarked Strasbourg fleur-de-lis above arms & C & I Honig (type Heawood 64/Churchill 428) as that sturdy Dutch quality paper Ridinger used in line with his preamble to the Principal Colors of Horses

“as for this purpose it is the most decent and best”. – Margins on three sides 1.4-3.3 cm, below 5 cm wide. – Down from the lower text field mould stained/traced, on the right trimmed to platemark. The pictorial effect still almost flawless, particularly matted as being delivered.