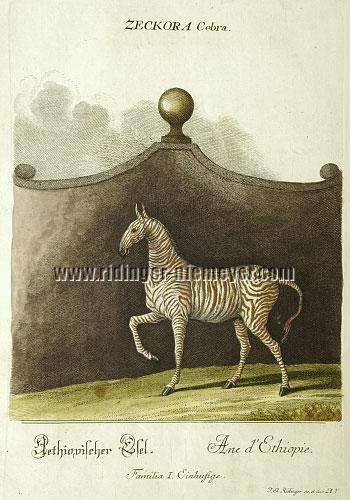 Ridinger, Johann Elias (Ulm 1698 – Augsburg 1767). Aethiopian Donkey (recte Zebra). Trotting vivaciously to the left in front of a dark wall. “It is nothing but a zebra which, however, worked from inaccurate drawings, turned to horse-like long-necked, shortly not as well as the previous one. The stripes are auburn” (Th.). Colored etching with engraving. Inscribed: ZECORA Cebra. / Aethiopischer Esel. / Ane d’Ethiopie. / Familia I. Einhufige. / J. El. Ridinger sc. et exc. A. V. 12¼ × 8¼ in (31.2 × 20.8 cm).

Thienemann & Schwarz 979. – IN THE RIDINGERS’ ORIGINAL COLORING from the unnumbered Colored Animal Kingdom created since 1754 and concluded finally posthumously not before 1773 (“Complete copies are next to untraceable”, so Weigel, Art Cat., sect. XXVIII, Ridinger Appendix 63a as merely 120-sheet torso, 1857 ! , but also just individual plates quite rarely on the market only, at niemeyer’s presently nevertheless the one as the others). – Remaining uncolored contrary to the prospectus, a second edition from the plates shortened even under loss of animals and with modified titling and the Ridinger inscription removed, yet now numbered, was published by Engelbrecht/Herzberg in Augsburg 1824/25.

“ Their head as well as the whole body and the hands are adorned with stripes which are so beautiful and even that they hardly can be drawn so fine and exactly. Each one has some variation in both the drawing and the color itself, too, just as we ourselves own 6. to 7. varying original drawings, among which there is especially one by Mister Hamilton, former Imperial Royal Court Painter in Vienna, according to which this animal again has quite different stripes and another base color than shows in these representations. Were they in regard of painting not so very toilsome we could and would communicate all such to the connoisseurs … In the size and height they surpass our donkeys and I myself have seen a natural skin of this animal … ”

“as for this purpose it is the most decent and best”. – Margins on three sides 1.9-3.1 cm, below 4.7 cm wide. – Small faint brown spot in the right white lateral margin, a slightly larger one hardly perceptible in the green grass coloring.