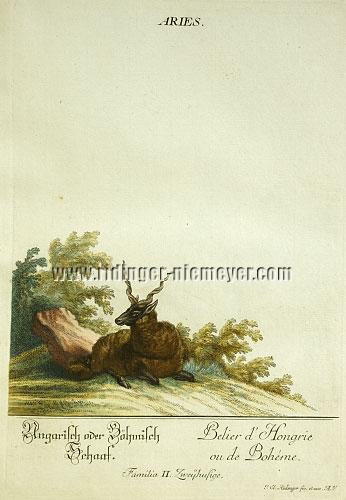 “ … yet Shows Particularly with its Horns

Thienemann & Schwarz 994. – IN THE RIDINGERS’ ORIGINAL COLORING from the unnumbered Colored Animal Kingdom created since 1754 and concluded finally posthumously not before 1773 (“Complete copies are next to untraceable”, so Weigel, Art Cat., part XXVIII, Ridinger Appendix 63a as merely 120-sheet torso, 1857 ! , but also just individual plates quite rarely on the market only, at niemeyer’s presently nevertheless the one as the others). – Remaining uncolored contrary to the prospectus, a second edition from the plates shortened even under loss of animals and with modified titling and the Ridinger inscription removed, yet now numbered, was published by Engelbrecht/Herzberg in Augsburg 1824/25.

“ To this (sheep/ram) representation still another of a Hungarian sheep has been added, which is a little larger and heavier than ours, yet shows particularly with its horns a marked difference. For as with ours the horns are wound backward, so with this kind these stand upward like an extended fork and also are

quite particularly turned or wound ,

also give them a rather good look ”

The rarer sujet in its vibrant colorfulness