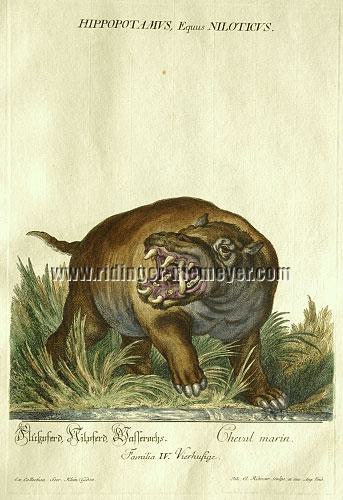 Thienemann & Schwarz 1029. – IN THE RIDINGERS’ ORIGINAL COLORING from the unnumbered Colored Animal Kingdom created since 1754 and concluded finally posthumously not before 1773 (“Complete copies are next to untraceable”, so Weigel, Art Cat., sect. XXVIII, Ridinger Appendix 63a as merely 120-sheet torso, 1857 ! , but also just individual plates quite rarely on the market only, at niemeyer’s presently nevertheless the one as the others). – Remaining uncolored contrary to the prospectus, a second edition from the plates shortened even under loss of animals and with modified titling and the Ridinger inscription removed, yet now numbered, was published by Engelbrecht/Herzberg in Augsburg 1824/25.

“ We have received the drawing of this dreadful animal by the kindness of Mr. Klein from the Ludolph collection. There is another representation of this animal to be seen in the Electoral Bavarian maison de plaisance Schleißheim, which is painted by Rubens from life … although only in grey color … as it is just defeated and captured … ”

(Ridinger’s sons in the preamble to pt. I, p. 23, enclosed in copy; in Rosenberg, P. P. Rubens / Des Meisters Gemälde, 2nd ed., 1906, page 109 only the Hunt for Crocodile and Hippopotamus in Augsburg with the latter largely concealed, although in the same position as here, which cannot be meant though).

Final state after removal of the reference to Jacob Theodor Klein’s 1751 Quadrupedum Dispositio brevisque Historia Naturalis, in the first state given as “2.D.S.XII.” as supposedly also present to Th., although this, frequently a little unreliable in his renditions, rather generally states “Q.” instead of “2.” and “§.” instead of “S(ection).”. The plate itself by the way annotated by him as follows:

“ It is worked after a drawing … It is not an entirely well-made illustration of the animal extremely rare over here, exact ones we have only received most recently (mid 19th century), but by no means it has to be called utterly failed. The head is too large, the coloring to vivid etc., but for that time it is good enough .”

“as for this purpose it is the most decent and best”. – Margins on three sides 2.1-2.6 cm, below 4.7 cm wide. – At the upper left white stitching margin some small brown spots.