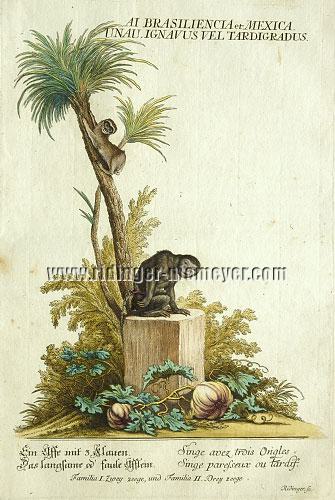 “ … in the Deserts of Brazil and Mexico ”

Thienemann & Schwarz 1039. – IN THE RIDINGERS’ ORIGINAL COLORING from the unnumbered Colored Animal Kingdom created since 1754 and concluded finally posthumously not before 1773 (“Complete copies are next to untraceable”, so Weigel, Art Cat., sect. XXVIII, Ridinger Appendix 63a as merely 120-sheet torso, 1857 ! , but also just individual plates quite rarely on the market only, at niemeyer’s presently nevertheless the one as the others). – Remaining uncolored contrary to the prospectus, a second edition from the plates shortened even under loss of animals and with modified titling and the Ridinger inscription removed, yet now numbered, was published by Engelbrecht/Herzberg in Augsburg 1824/25.

“ … hence only one animal remains for us …

is found nowhere but in the hottest part of America .

Such one is named: (1.) Unau, the slow or lazy monkey, sloth. The habitat of this animal actually is in the deserts of Brazil and Mexico. Although we had … the grace for long to deliver the representation of this animal, because we have not seen any of these alive ourselves yet; however, since it is just the only one which belongs to this order, we did not want to omit the representation of the same entirely and therefore decided to produce such from a painting from Romandy, in which various foreign animals were represented we already knew and appeared to have been painted from truth and nature …

2. Ai, sloth with three claws … this representation we owe to the kindness of Mr. Jele (Jakob Jehle [?] from Schwäbisch Gmünd, d. Regensburg 1602), the famous portrait painter formerly residing in Nuremberg, in the true and certain drawing of which there can be no doubt; The habitat of these animals is … Brazil up towards Mexico … only that the Ai rather can get some more exercise than the aforementioned Unau ”

The attribution of the work to Johann Elias’ eldest, Martin Elias, based on the notation considered here as individual – like a dot or comma between “Ridinger” and for instance “sc.” – as compared against such plates of the Animal Kingdom inscribed with his name.

“as for this purpose it is the most decent and best”. – Margins on three sides 1.5-2.5 cm, below 4.5 cm wide. – Acid-freely backed 2-cm tear in the white margin upper left and outside the subject partially mostly just faintly age spotted.