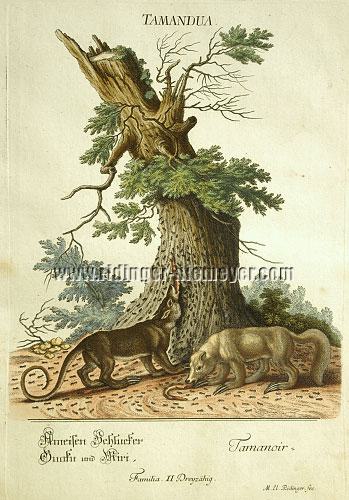 Ridinger, Martin Elias (1731 Augsburg 1780). Ant Eater / Guaku and Miri. Two of them differing from each other, related to the anteater, with text added as below. The one with very long tail in brown, licking the quarry from a thick oak trunk, the other light grey with less long, although very bushy tail, decimating the crawling on the ground. Colored etching with engraving. Inscribed: TAMANDUA. / Ameisen Schlucker / Guaku und Miri. / Tamanoir. / Familia II. Dreyzähig. / M. E. Ridinger. fec. 12¼ × 8¼ in (31.2 × 20.8 cm).

Thienemann & Schwarz 1041. – IN THE RIDINGERS’ ORIGINAL COLORING from the unnumbered Colored Animal Kingdom created since 1754 and concluded finally posthumously not before 1773 (“Complete copies are next to untraceable”, so Weigel, Art Cat., sect. XXVIII, Ridinger Appendix 63a as merely 120-sheet torso, 1857 ! , but also just individual plates quite rarely on the market only, at niemeyer’s presently nevertheless the one as the others). – Remaining uncolored contrary to the prospectus, a second edition from the plates shortened even under loss of animals and with modified titling and the Ridinger inscription removed, yet now numbered, was published by Engelbrecht/Herzberg in Augsburg 1824/25.

by the especially long tongue

from all other animals of the whole earth …

(Ridinger’s sons in the preamble to pt. II, p. 2, enclosed in copy). Thienemann on this:

“ Supposedly among these quite queer names the Capian Aardvark … but this species one has transformed into two … and both worked from imagination, at discretion. Such animals are nowhere. ”

“as for this purpose it is the most decent and best”. – Margins on three sides 1.9-2.7 cm, below 4.5 cm wide. – In the white paper margin partially faintly stained and a small thin spot far left precautionarily backed acid-freely. – Very painterly .