Thienemann & Schwarz 1075. – IN THE RIDINGERS’ ORIGINAL COLORING from the unnumbered Colored Animal Kingdom created since 1754 and concluded finally posthumously not before 1773 (“Complete copies are next to untraceable”, so Weigel, Art Cat., sect. XXVIII, Ridinger Appendix 63a as merely 120-sheet torso, 1857 ! , but also just individual plates quite rarely on the market only, at niemeyer’s presently nevertheless the one as the others). – Remaining uncolored contrary to the prospectus, a second edition from the plates shortened even under loss of animals and with modified titling and the Ridinger inscription removed, yet now numbered, was published by Engelbrecht/Herzberg in Augsburg 1824/25.

“ The Latin name is correct here. It is the American Lion, or the Cougar. Klein calls it the American tiger. He leaps up at a boulder and we see him furiously from behind ”

(Th.). And Ridinger’s sons themselves in the preamble on this:

“ With respect to these beasts there is a frequent contradiction with the writers themselves and quite often they have confused with each other the leopard, the panther animal and the tiger. In recent time many such animals have been brought to Europe indeed … However, since for our part we do not dare to decide due to a lack of sufficient and convincing first-hand experience, we have presented this species of animals here just as we have seen it from time to time … Thus we have tried to make it as well as was possible for us and feel compelled to ask for forbearance if we should not have fully satisfied all expectations. “ 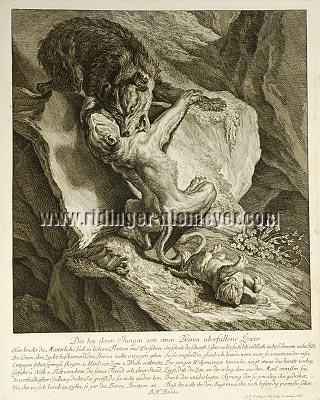 Lioness assailed at Her Young Ones by a Bear
(Th. 718; comparative ill.)

The position of the beast furiously leaping up at a boulder quite related to Th. 718, the “Lioness assailed at Her Young Ones by a Bear” as sheet 3 of the first four plates of the complete extremely rare Fights of Killing Animals held back for decades for socio-political caution.

“as for this purpose it is the most decent and best”. – Margins on three sides 1.8-3.2 cm, below 5.4 cm wide. – Quite faint tidemark on the back quite minimally showing through in the lower white text/paper field.

“ … I continue to enjoy my Keele-Pedretti (Leonardo) volumes … ”