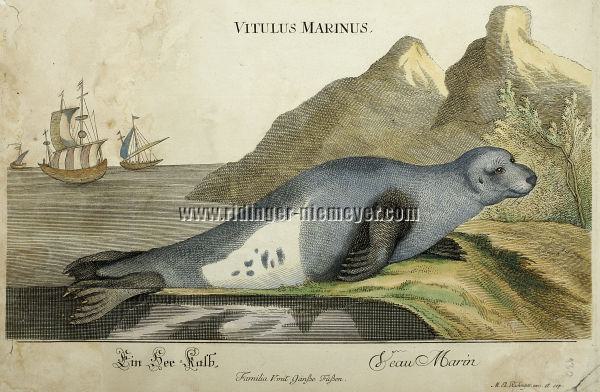 Thienemann & Schwarz 1099. – IN THE RIDINGERS’ ORIGINAL COLORING from the unnumbered Colored Animal Kingdom created since 1754 and concluded finally posthumously not before 1773 (“Complete copies are next to untraceable”, so Weigel, Art Cat., sect. XXVIII, Ridinger Appendix 63a as merely 120-sheet torso, 1857 ! , but also just individual plates quite rarely on the market only, at niemeyer’s presently nevertheless the one as the others). – Remaining uncolored contrary to the prospectus, a second edition from the plates shortened even under loss of animals and with modified titling and the Ridinger inscription removed, yet now numbered, was published by Engelbrecht/Herzberg in Augsburg 1824/25.

“ The illustration of this animal, which we have seen alive here in Augsburg a short time ago, is done from life … Who has seen this will be able to get the more easily an idea of the previous big animal (Sea Lion, Th. 1097) ”

“as for this purpose it is the most decent and best”. – Margins on two sides 1-1.9 cm, above and left 3.5-4.2 cm wide. – Severe water stain of 13 cm on the left of the back penetrating the front quite fully, left upper corner partly up to the platemark fissured with losses. Further margin tears and partial loss of also the right lower corner, but outside of the still complete inscription. The picture itself including the caption yet ultimately still utterly unimpaired and matted, as being delivered, quite presentable.