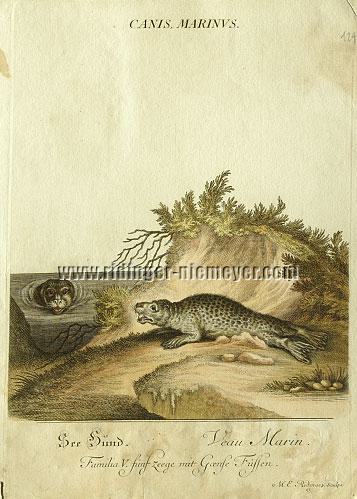 Thienemann & Schwarz 1098. – IN THE RIDINGERS’ ORIGINAL COLORING from the unnumbered Colored Animal Kingdom created since 1754 and concluded finally posthumously not before 1773 (“Complete copies are next to untraceable”, so Weigel, Art Cat., sect. XXVIII, Ridinger Appendix 63a as merely 120-sheet torso, 1857 ! , but also just individual plates quite rarely on the market only, at niemeyer’s presently nevertheless the one as the others). – Remaining uncolored contrary to the prospectus, a second edition from the plates shortened even under loss of animals and with modified titling and the Ridinger inscription removed, yet now numbered, was published by Engelbrecht/Herzberg in Augsburg 1824/25.

“ (T)hese animals … are frequently found towards the North … Their skin usually is strewn with numerous black spots and shiny, one also uses it for various things. One gets a lot of train oil from them, therefore every year some ships leave for Greenland to kill the seals on the ice or on the land, which frequently is done with but a single stroke across the nose … This present illustration we owe besides to the kindness of Mr. Klein in Danzig ”

“as for this purpose it is the most decent and best”. – Margins on three sides 1.4-2.5 cm wide, below trimmed to platemark and defects in the white paper margin of up to c. 2 x 2 cm backed acid-freely. Waterstains on the back of up to c. 8 cm below, 5 cm laterally upper right visible on the front only in the text and white paper field. Backed dog’s ear top right, faint small brown spot in the paper margin upper left, far top edge feebly tidemarked. The pictorial effect of the decidedly charming motif ultimately unimpaired.