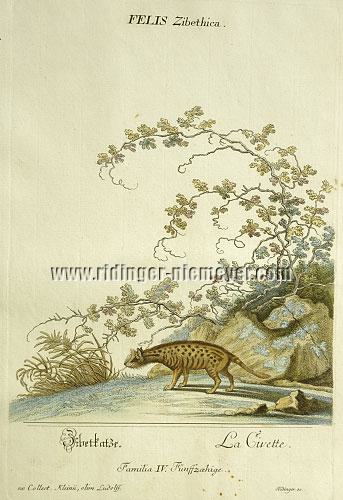 “ … carries the Known Civet
which is a Big Trade ”

Thienemann & Schwarz 1066. – IN THE RIDINGERS’ ORIGINAL COLORING from the unnumbered Colored Animal Kingdom created since 1754 and concluded finally posthumously not before 1773 (“Complete copies are next to untraceable”, so Weigel, Art Cat., sect. XXVIII, Ridinger Appendix 63a as merely 120-sheet torso, 1857 ! , but also just individual plates quite rarely on the market only, at niemeyer’s currently the one as the others all the same). – Remaining uncolored contrary to the prospectus, a second edition from the plates shortened even under loss of animals and with modified titling and the Ridinger inscription removed, yet now numbered, was published by Engelbrecht/Herzberg in Augsburg 1824/25.

“ It is otherwise also called the civet animal and it is found in the hottest regions of Africa and Asia. This animal carries the known civet which is a big trade … They are slightly larger than the genet cats (Genet Cat) … One keeps them in houses, too … however, as they get older they get wild again, so that one may not trust them ”

The attribution of the work to Johann Elias’ eldest, Martin Elias, based on the notation considered here as individual – like a dot or comma between “Ridinger” and for instance “sc.” – as compared against such plates of the Animal Kingdom inscribed with his name.

“as for this purpose it is the most decent and best”. – Margins on three sides 1.6-3 cm, below 5.4 cm wide. – Some little brown spots in the white text/plate field.

“ (after postal problems with the delivery) I have now received the package. thank you for your perseverance (to find the parcel again) in this matter. Warm Regards … ”