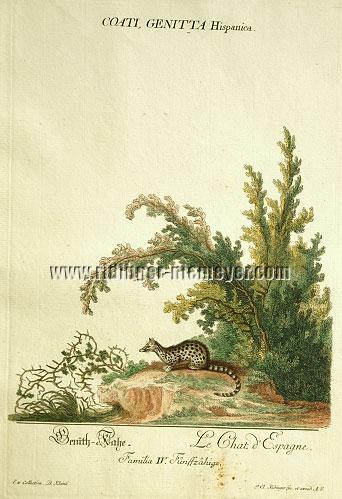 “ Sought for its Soft and Beautifully Spotted Fur ”

Thienemann (“The name Coati is not due to it, also it should not be called cat, for it … has nothing [so not correct, as viverrid it belongs to the feliforms] in common with the cat”) & Schwarz 1065. 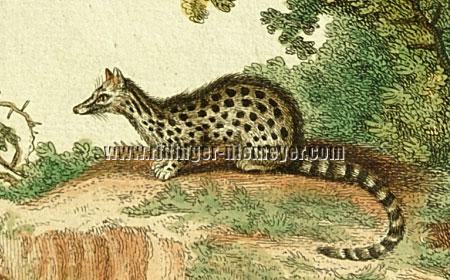 “ … inhabits the countries of the Atlas Mountains, but is also found in Spain and Southern France, prefers humid, shrub-rich regions … Its coat provides sought after fur. Charles Martel (“Savior of the Christian-Germanic culture … [in the face of the] violent brunt of the Arabs in Spain and Aquitaine”, Meyers Konversations-Lexikon, 4th ed., IX [1889], 511) took many clothes furnished with this fur after the victory over the Saracens in 732 and

instituted an Order of the Genet

whose members were the first princes ”

“ This animal … carries a sac behind, too, which is filled with a sweet-scented juice and perspires such … In the regular spots its coat surpasses still the aforementioned civet cat … and in its behavior it is similar to all the rest of the species of the cats. ”

Final state with the Familia line within the caption slightly moved up after the removal of the “Q. D. S. XXVIII.” as reference to Jacob Theodor Klein’s Quadrupedum Dispositio brevisque Historia Naturalis of 1751 unbeknown to Thienemann.

“as for this purpose it is the most decent and best”. – Margins on three sides 1.8-3 cm, below 5.1 cm wide. – Some also a little larger brown spots in the white text field.