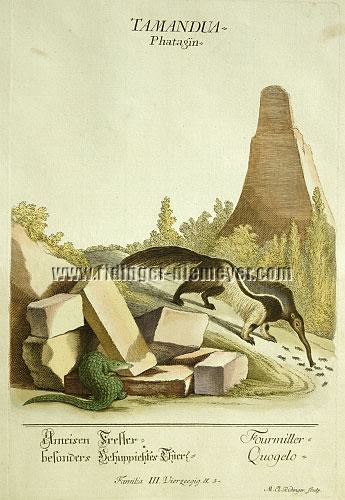 “ The Illustration of the Giant Anteater
is … quite well-done ”

“ These animals have no tongue (as the Ant Eater), but a proper elephant’s trunk, at the end of which is like a small finger. The whole frame of the body of these animals quite particular by the way, also in regard of the color it strongly differs from the others, even though in the behavior it has much in common with them. We have rendered this animal

with which the representation of Mr. Buffon has been compared, too,

here as well for its rarity ,

has not yet come before the eyes of very many ” 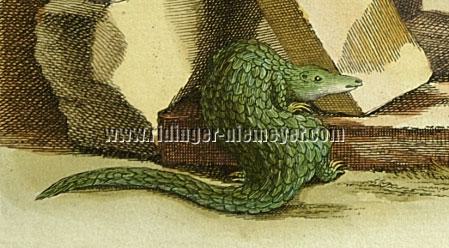 “as for this purpose it is the most decent and best”. – Margins on three sides 1.9-3.4 cm, below 5.3 cm wide. – Isolated quite faint (little) stains in the white plate/paper field and small faint spot far left outside the latter precautionarily backed acid-freely.

“ I purchased this set (Leonardo’s Anatomical Studies) from you at the beginning of this year (recte already in 2011). The books are one of my prized possessions … and thank you again for being a part of this special section of my library … ”