“ In India the tiger is regarded with superstitious dread

and considered a kind of punishing god. Also in Eastern Siberia similar ideas prevail, and on Sumatra the tiger is perceived merely as the frame of a deceased human and one dares not to kill him ” (Meyers Konversations-Lexikon, 4th ed., XV [1889], 707).

“ The term ‘royal tiger’ originally hails from the English hunter’s jargon and designated no particular subspecies, but particularly big specimen representing coveted hunting trophies. The designation is comparable with ‘twelve-pointer’, by which in the German a royal stag with mighty antlers of twelve points is meant and not a particular species. These royal tigers not only had an especially contrasty coat color, but also a very regular pattern of the black stripes which were not interrupted. 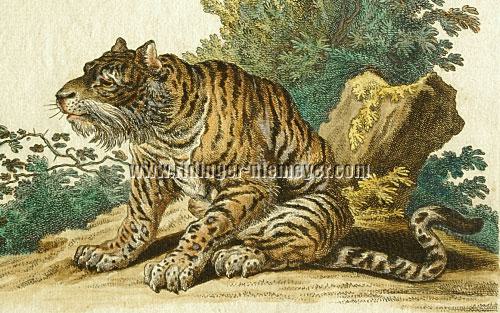 These individuals therefore represented a special

and very rare type in the formation of the striped pattern

and are not found commonly among the royal tigers .

Beside these animals all other royal tigers were just ‘common’ tigers. Until then the subspecies of tigers was simply called ‘Indian’ and ‘Bengal’ tiger resp. Later the term was transferred to all Indian tigers ” (Wikipedia).

And such an absolute specimen is present Ridinger ,

although having been dependent on “how we … have seen this species of animals here … from time to time … for there is a frequent dissent with the writers and quite often they have mixed up the leopard (as Ridinger, too, see above), the panther and the tiger”, so Ridinger’s sons in the preamble – relevant passage included in copy – to the Colored Animal Kingdom.

“as for this purpose it is the most decent and best”. – Margins on three sides 2-2.5, below 5.1 cm wide. – Faint tidemark on the back along with little discoloration stains faintly showing through in the lower text/paper field.

“ Thank you very much for your prompt and very cooperative handling of this order. I very much look forward to seeing the map ”