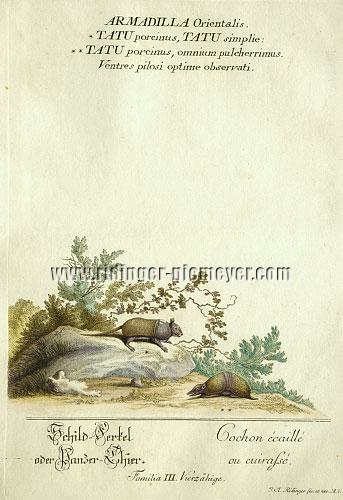 Thienemann & Schwarz 1042. – IN THE RIDINGERS’ ORIGINAL COLORING from the unnumbered Colored Animal Kingdom created since 1754 and concluded finally posthumously not before 1773 (“Complete copies are next to untraceable”, so Weigel, Art Cat., sect. XXVIII, Ridinger Appendix 63a as merely 120-sheet torso, 1857 ! , but also just individual plates quite rarely on the market only, at niemeyer’s presently nevertheless the one as the others). – Remaining uncolored contrary to the prospectus, a second edition from the plates shortened even under loss of animals and with modified titling and the Ridinger inscription removed, yet now numbered, was published by Engelbrecht/Herzberg in Augsburg 1824/25. 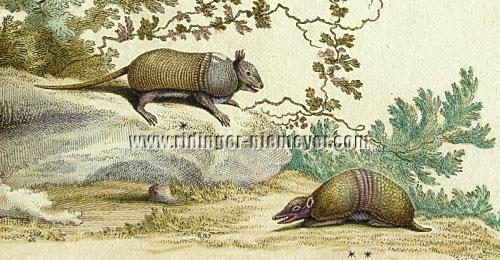 Armadillos: on the right the Brazilian three-banded armadillo (detail)

“ The illustration (of the armor animal or shield piglet) we owe to the kindness of Mr. Secretary Klein again … It is enveloped so to speak in a cuirass which consists of larger and smaller scales which are so hard

that they can be penetrated by no bullet .

This animal is an accomplished ant hunter … However, if it cannot escape anymore, it rolls itself up in a ball and hides the head and tail so deep below the belly that one cannot see anything of both anymore and

… one finds it in both East and West India ”

(Ridinger’s sons in the preamble to pt. II, p. 3, enclosed in copy). Thienemann on this:

“ Which Armadillo a) shall depict I am unable to determine, b) is the Brazilian three-banded armadillo, Dasypus tricinctus (= endemic to the northeast of Brazil and rarest species of armadillos). ”

Caviling at the not even that considerable smallness of the animals, Thienemann disregards, from the point of view here, both the relations necessary for the whole work and the painterly pictorial effect always attained by the scenery. Besides a platework simply requires the uniform format and the connoisseur values its generous design and just for this dismisses the trimmed down, uncolored new edition of the 1820s, of which Thienemann (p. 200) says many plates would look better now, yet has to admit that “also at the same time many tops of trees and shrubs, many decorations, indeed some animals had been taken away, too”. Indeed. One cannot have both at the same time.

“as for this purpose it is the most decent and best”. – Margins on three sides 2-2.7 cm, below 4.5 cm wide. – Some small brown stains/spots almost only in the left white paper margin.

“ I would like to thank you most sincerely for your expert analysis of the portfolio and for the considerable amount of time you gave to this effort. I will take your advice and we shall see what happens … Again, my sincere thanks ”