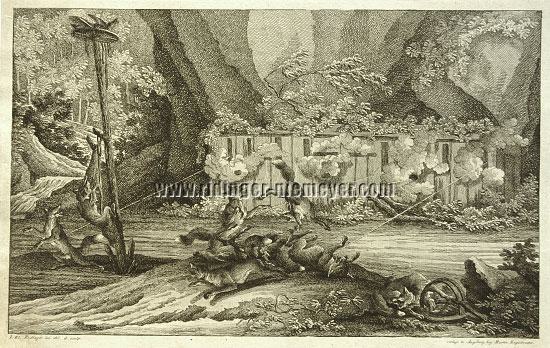 Ridinger, Johann Elias (Ulm 1698 – Augsburg 1767). (How the Foxes are baited, captured and stalked.) On a small elevation in the center four reynards have been tempted by a roe or red deer bait, which three pay for with their lives while the fourth runs off barking. On the right another one has been caught in a steel trap. On the left on a pole a live duck or goose, besides bait hooked up into which a reynard has locked into, yapped at by a further one already struck by a bullet. The hunters themselves behind a wall in the shrubbery at the foot of a rock. Instructively sketched the lines of fire. Etching with engraving. (1750.) Inscribed: I. El. Ridinger inv. del. & sculp. / verlegt in Augsburg bey Martin Engelbrecht. 9 × 13⅞ in (22.7 × 35.2 cm).

Thienemann & Schwarz 89; Schott, Martin Engelbrecht und seine Nachfolger, p. 150. – Not in the Ridinger catalogs Darmstadt (1999) and Kielce (1997). – Sheet 21 of the instructive 30-sheet set Ways to trap the Wild Animals (“A rare set, of importance to those who are interested in the various methods of trapping wild animals”, Schwerdt 1928, and “Rarest of All Hunting Sets by Ridinger” [Halle, Munich 1928, LXVIII/323]), as a whole missing even in Helbing’s monumental offer Arbeiten von J. E. und M. E. Ridinger (catalog XXXIV [1900], 1554 lots) and moreover

one of the five missing there also as individual sheet !

“ … ‘The Ways to trap the Wild Animals’ belong to the chief works among Ridinger’s representations of the hunt … here, too, extensive captions are added to the plates which elucidate the depiction … This – typical for Ridinger –

combination of high-quality work of art and … text

should be a reason for the great success of his works ”

The caption according to Thienemann may be:

“ Also for foxes shooting lodges are set up. Before the same are high poles erected on which the bait is mounted, and the shrieking of a duck mounted on top tempts the appetite of these four-legged fowl lovers. So they partly fall into the steel irons set for them, partly they are killed, too, by the well-aimed crossfire of the guns of the shooters lying in wait in the overgrown ambush. ”

(& Th. 74, 75, 91) which bear the address of Martin Engelbrecht (1684-1756, the equal-named publishing house till 1827) in Augsburg already from early on, but usually show up without the explaining caption which, however, was known to Thienemann (1856) via Weigel and

for Th. 91 , The Badger captured with the Turnpike ,

is confirmed per the original copper printing plate present here .

Nevertheless the captions deviate from the other sheets of the set by both their brevity and stylistically and Ridinger’s inscription with Latinized “I” as documented only rarely and then for supposedly mostly early works, partly not yet etched by himself. Whereas Engelbrecht’s “published at” instead of the usual “excudit” rather suggests the period after Ridinger when about 1824/25 a new edition was published by Engelbrecht-Hertzberg. Where the set of the Ways to trap the Wild Animals totaled only 28 sheet anymore though.

However, said sheets occur in throughout fine printing quality almost always on laid paper while aforesaid new edition was printed on cloudy vélin (watermarks Thurneisen or Oeser Basel, cf. lot 5172 of the Tenner sale 142, 1982). This then again and again and especially in the absence of deeper knowledge giving rise to according qualifications. So as “before the letter” (Hamminger for Th. 75 & 89; “Exceedingly rare!”, 1895), “Before the letter, only with the artist’s name and (Engelbrecht’s) address” (Schwarz, 1910, in conformity to the above, for 74a & 75), “Proofs” (Schwerdt, 1928, for Th. 74, 75 & 89), “Early impressions before the text” of the otherwise “four sheets published later only” (L’Art Ancien, 1939, on occasion of the offer of the Schwerdt copy), “Prints before the letter, just with artist name and address” (counts Faber-Castell, 1958), “States on laid paper with inscription & Engelbrecht’s address, but before title and caption“ (here, 1978, with the first reference to the insufficiently described characteristics and the priority of the states).

Not forgetting, too, that Ridinger’s earliest and still rarer hunting set, Great Gentlemen’s Pleasure in Various Hunts, still engraved by third party, Th. 1-8, had been published about 1722 by Engelbrecht. All in all thus quite imaginable

that these four plates actually are already from Ridinger’s early period ,

that is between c. 1724 and 1728 as the first appearance of his inscription as etcher/engraver, too (“sculps. Aqua forti”, so for the animal pieces after Johann Heinrich Roos, Th. 793-802), until 1728 still for third parties. If with or still without caption has to remain undecided just as Engelbrecht’s part in it.

Of little help lots 7A (“old impressions” without comment) & 7B (“in later impressions where with no. Th. 74, 75, 89, and 91 the caption has been covered, and these bear Engelbrecht’s address”) in Weigel’s Art Stock Catalog, pt. XXVIII (1857), Ridinger appendix. According to which the four sheets in question showed the caption within the complete set 7A – on which Thienemann should have drawn upon – , albeit not within 7B anymore.

Yet why then are these sheets that rare with the text? If the caption should have been added subsequently only, as is supported by aforesaid brevity & style, then why should it have been covered instantly? For if in the end it had proven as interfering, how much more so then in its covered state.

But also Weigel’s 7B attribution as later prints cannot convince if with regard to paper and print of indeed the contemporary quality documented afore. It also could be vice versa:

7B with the caption erroneously stated as covered, yet missing indeed, would be the first or A edition, in analogy to the usual occurrence as “before the letter”. 7A, however, would be the later B edition in which the text had been added by a different hand. Which, however, did not see, as not unusual, a wide circulation and thus elevated the four sheet in question with the text to almost uniques. Remains to be seen how in case of a copy certified for the new edition of 1824/25 its four aberrants present themselves.

Even though the enigma of these four sheets probably may never be solved conclusively, Thienemann’s “at times” these sheets bear no caption and Engelbrecht’s address should suggest newer impressions can be interpreted contrarily only. “At times” there are indeed impressions with the inscription.

With the Otter in the Trap and the Steel Iron etched by Martin Elias in a copy “before all letter” there was another interesting variant in the Gutmann Collection by the way (Schwarz 93a).