“ Several Birds
not yet depicted at his Time ”

Thienemann & Schwarz (vol. I, ill. of pl. III) 755-758; Weigel 44 A (of A-C). – Not in the Ridinger catalogs Darmstadt, 1999, and Kielce, 1997. Missing also in the Coppenrath (1889/90) & Schoeller (1921) collections. And only one single copy (“Very fine impressions with wide margin”) with market sweeper Georg Hamminger 1895 as well as two single sheets each of two of the plates, one of which mounted and without margin. Helbing, however, assembled for cat. XXXIV, Arbeiten von J. E. und M. E. Ridinger, 1900, two copies of the set, one of which in later impressions, as well as several individual sheets, partly new impressions or trimmed or otherwise defective. – Here then on strong laid paper, partly with typographic watermark, in

on half sheets uncut on three sides

and in such a manner with margins above & below 9.5-11 cm, laterally 5.5-6.3 cm wide. – In the upper margin the two pin holes of the original stitching, small tears in the deckle edges mostly backed acid-freely, the lower deckle edge of pl. 3 additionally a little time-marked. Pl. 4 lower right with faint tidemark barely perceptible in the white platemark.

of several birds not yet depicted at his time … ”

So in Ridinger’s considerable property of drawings within J. A. G. Weigel’s estate catalog of drawings of 1869 there are still about twenty drawings with eagles and owls. To these a number of further ones in community with other birds adds, which, based on their inscriptions, frequently are to be attributed, however, to the likewise four-sheet Birds with Various Biblical Proverbs as the second of Ridinger’s two bird sets, the Fables or the Concert of Birds not executed in engraving.

Remarkable that the for the most part dated works are from 1741 almost throughout. Few exceptions from 1742 mostly related to fables not executed in print. Merely a standing eagle with spread wings seen from behind in black chalk from 1747. Drawings for the Birds with Various Biblical Proverbs remained without date. 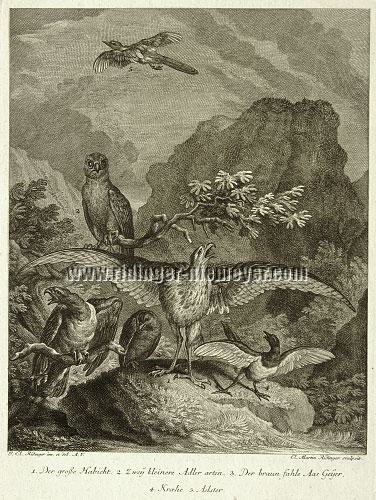 Cf. the pen-and-ink drawing in outline Weigel 379: An Assembly of Birds, in the center on a rock the eagle with spread wings, surrounded by owls, falcons and other birds of prey on rocks and a trunk. 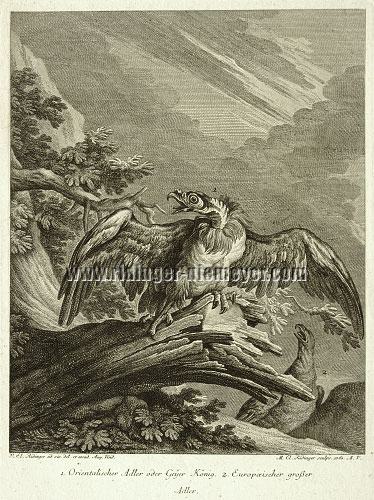 Adducible possibly the Common eagle with spread wings on a trunk in slight pen-and-ink from Weigel 323. 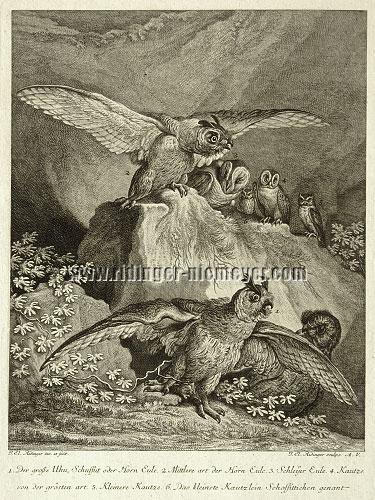 “ 1. … is strix Bubo Linn. Besides an unnamed owl, without feather tufts. A young eagle owl? 2. … We have a medium eared owl indeed (strix otus Linn.), yet for this it is far to big. Supposedly it is the great eagle owl, male, too. 3. … not bad (strix flammea Linn.), which is also named tower or church owl. 4. … This name seems to indicate our brown owl (strix aluco Linn.), but in nature this is larger, in the depiction significantly smaller than the barn owl. 5. … We call the earless owls Kauz, however, this shows distinctly feather tufts and therefore might represent the smallest eared owl (strix scops. Linn.). 6. … Maybe

Among the heads of the fully inscribed chalk drawing Weigel 332 from 1741 – see following below – also a “Schoffittel”, there however identified by Thienemann as smallest eared owl (strix scops. Linn.). As belonging to present sheet Four Various Owls by a Rock in black chalk (Coppenrath II [1889], 1933, probably identical with W. 330). Adducible also the Rock Part with Six Owls: the Great Eagle Owl, Barn Owl, and Little Owl (W. 333) executed in pencil (birds) and pen-and-ink outline (landscape). 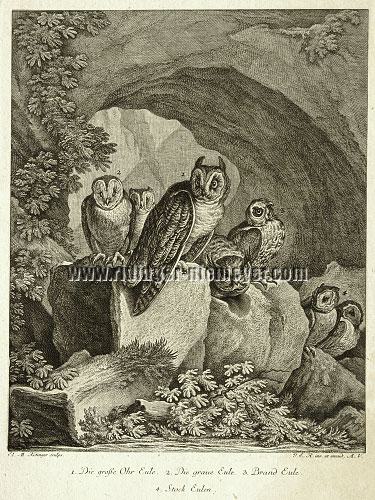 “ In a rock cave seven owls sit, supposed to belong to four species … 2. … supposedly barn owl … 4. … two piece, of which one shows distinct feather tufts. Therefore this might be

of the short-eared owl (strix brachyotos) :

For the great eared owl (eagle owl) see the central big study of the head in the aforementioned drawing Weigel 332 (ill. Th., pl. 5).

In the new edition by Engelbrecht-Herzberg of 1824/25 present four sheets were offered augmented by the slightly larger Birds of Prey by Day (Th. 273) & Icelandic White Falcon spotted with Black Feathers (Th. 284) removed from the Most Wondrous Deer and other Peculiar Animals and worked exclusively by Johann Elias Ridinger. Here, however, it may be repeated, the four-sheet set as created by Ridinger in contemporary impressions on half sheet each with deckle edge on three sides

of utterly uniform even beauty

and in such a manner fine proof

of Ridinger’s but slender ornithological work .

“ The prints arrived today! They are very nice. Thank you for excellent service. Please keep me posted for objects I could be interested in! ”