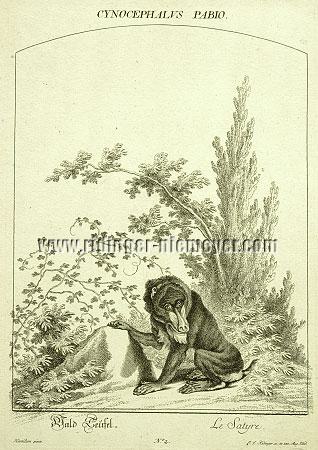 Sheet 2 of the set of Ten Plates Monkeys or Animals yet related to them published without title sheet, “destined to be colored and to follow Ridinger’s large work”,

Thienemann’s further remark that the plates had been “reduced later … and incorporated slightly modified (partly with respect to the caption, too) into the colored plates” not correct and presumably just superficially based on the equal number of 10 plates each. Actually in the Colored Animal Kingdom, not completed anymore by the father himself, the depictions themselves are considerably smaller to provide more space for the caption, while the plates are of almost the same size. Where with the exception of the Lion Long-tailed Monkey (Th. 548 and 1088 resp.) repeated in almost unmodified position, Martin Elias as engraver of nine of the ten plates took over numerous, but by no means all animals of the set of the monkeys, partly in similar, yet distinctly modified position, partly in entirely new compilations, as well as adding previously not considered species. Present wood devil there then in the same position, but standing (Th. 1086).

“ It’s a truly one-of-a-kind very special item and I congratulate you on having the resources to have found it … You indeed have some wonderful things for sale.

“ These (ship) plans are indeed an exceptional find, Jan Hendrik, and I THANK YOU for making them available for sale. They are truly unique … Also – may I compliment you on your fantastic website display of the … plans – It is among the most professional and informative website I have ever seen! Mit Vielen Dank!!

“ Just a quick note to let you know your beautifully packed parcel arrived Friday in excellent condition due to your careful work. THANK YOU for wrapping it so well – certainly better than I could do – and that says a lot. It’s has been a real pleasure working with you … “